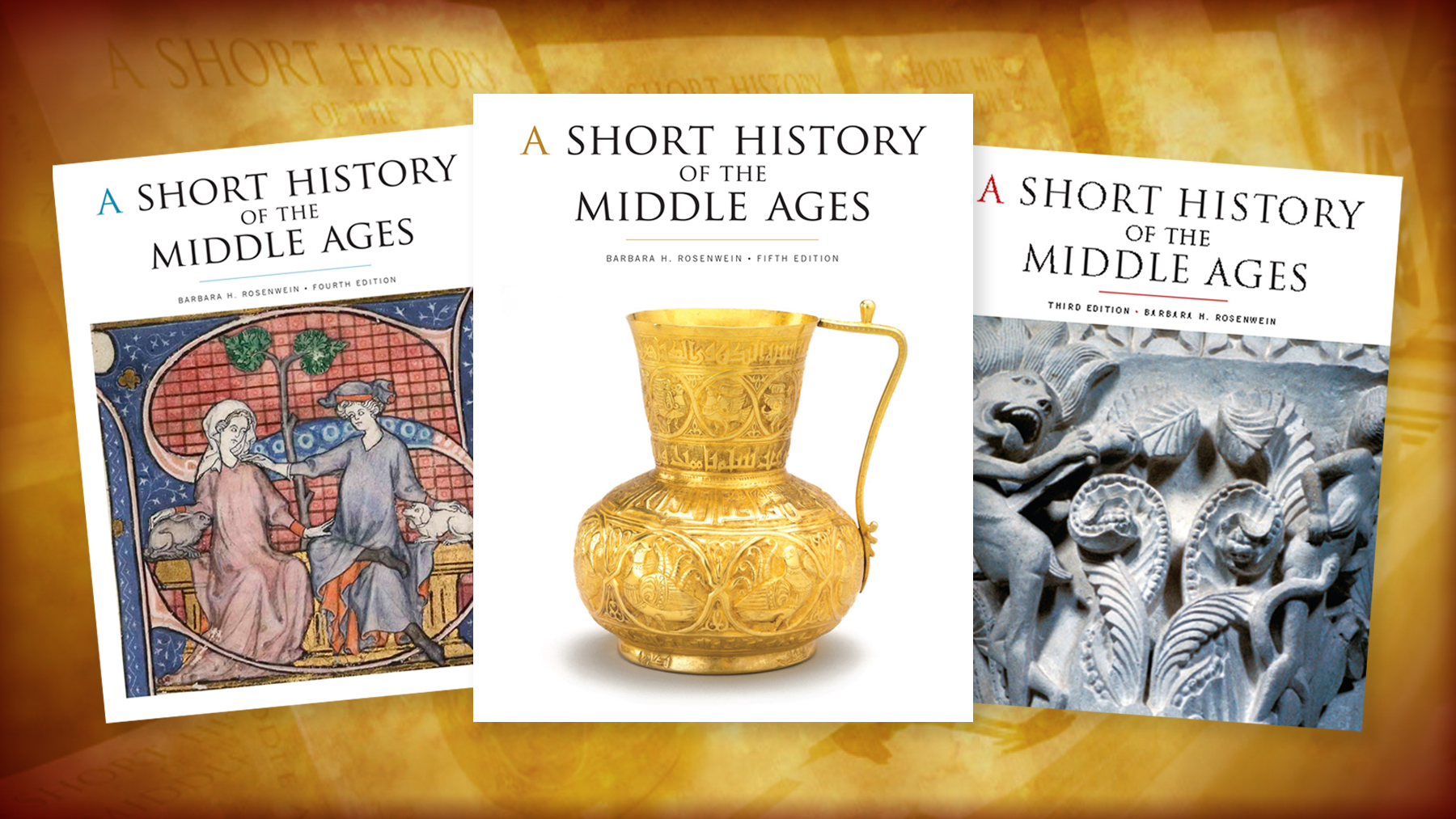 Our brand new blog launches this week, and we could think of no better author to help us kick off our virtual festivities! Barbara H. Rosenwein, author of the bestselling textbook A Short History of the Middle Ages and editor of the accompanying source collection, Reading the Middle Ages, provides us with a very insightful and fascinating trip back to the inception of her textbook project – a project that has now spanned decades and influenced thousands of young medievalists. We may not know for sure what college and university courses will look like in the near future, but we are confident that time-tested and well-loved narratives like A Short History of the Middle Ages will continue to leave their mark on the teaching of history. 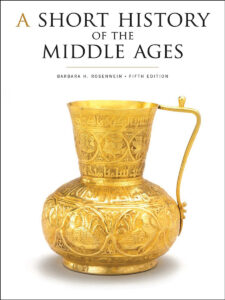 If you are reading this, you are probably using, or thinking of using, A Short History of the Middle Ages for your courses, and you might be wondering what induced the author to write it and why she wrote it the way she did.

And at this moment, you might also be asking yourself how A Short History might be relevant to students (and you) in the midst of a pandemic.

The answers are actually the same: from the start, I wanted to write a book that took the whole medieval world into account, not just (as was the case with leading textbooks at the time) Western Europe. Even though there was no pandemic in the 1990s, when I was writing the first edition of A Short History of the Middle Ages, we all knew about global efforts to eradicate polio and the worldwide scourge of AIDS. Above all, medievalists knew, or should have known, that the so-called plague of Justinian and the Black Death were not just European phenomena. This, as well as so many other intercontinental connections, was unclear in the major textbooks of the time. Their European focus seemed wrong to me.

In fact, they didn’t look at all of Europe, concentrating instead on England, France, and the papacy. They catered to a market in the United States that looked to the Middle Ages for the origins of certain highly-favored modern institutions: common law, parliaments, and the university itself. Why, the thinking went, go much beyond France and England for those lessons? But I was not interested in the origins of anything; I was interested in what medieval history could tell us about itself, and through that, what it could tell us about human creativity, conflict, and change more generally.

I was unhappy with two other features in those earlier textbooks: their topical organization and their underdeveloped map and illustration programs. Leaving the organization to the side for the moment, consider the maps. They were in black-and-white and, I’m sorry to say, were not very helpful. For example, a map for Italy c. 1000 did not identify Rome, even though the text talked about the difficulty of northern kings to control areas south of Rome. Or consider another map – in a different textbook – of “Medieval Germany and Italy.” It had no date. Were students to imagine that the contours of medieval Germany and Italy never changed? I wanted my students to have a comprehensive map program keyed to the events in each chapter.

As for the illustrations in those earlier textbooks: so much more could have been done. The pictures – very few, very small, and all in black and white – were furnished with perfunctory captions. Few were discussed in the text, as if they were simply eye-candy for students weary of reading the real history offered by the textbook author. A prime example must be Romanesque architecture, for which those textbooks offered a few illustrations but no discussion at all. I wanted text and images to work together, to illuminate each other. I was convinced that art, architecture, artifacts – and now I would widen that to material culture in general – should be presented as primary sources in their own right and integrated in discussions of the political, economic, and intellectual developments going on at the time. And I was also anxious, I admit, to show off the profundity, grandeur, complexity, and beauty of medieval objects in order to counter the image of the medieval “dark ages” – a prejudice all too well reinforced by small, fuzzy, black-and-white photographs.

In short, I had a lot to quarrel with.

What I did not object to was the need – recognized by the existing textbooks – for a clear political narrative alongside treatments of culture, economy, and society. Students tend to hate dates – at least my students did. But I firmly believe in dates, hard as they are to memorize, because they give us hooks onto which we can hang disparate matters and see how they work together.

And that brings me to the issue of organization. There are basically two ways to organize a history textbook: by themes and by chronological slices. I was and remain firmly in the latter camp. The hiving off of Byzantium and Islam is only one example of the problems that come in the wake of thematic structure. Here is another: taking up a topic like “Conquests and Crusades” in one chapter means going from the Spanish reconquista of the eleventh century to the closing of the medieval frontiers at the beginning of the fourteenth. It means divorcing all of those developments from everything else going on. But to me it is extremely important to consider the early reconquista and First Crusade as part of the Church reform movement of the eleventh century, which was in turn related to the growth of urban movements in Italy and to Italian mercantile ventures in Byzantium; to the increasing power of the emperor in the (German) Empire; and to the development of powerful monastic orders, starting with Cluny and associated with the transformations in architecture that we call Romanesque. Furthermore, it is important to consider later Crusades not simply as “continuations” of the first but as products of their own historical contexts.

In my view, taking history in “chronological slices” gives students just enough dates to offer a skeleton on which the sinews, veins, arteries, and skin – an era’s culture, society, economy, religion, and thought – may find their proper place as part of a coherent whole.

These were the reasons why I responded eagerly when Broadview Press sent me – along with many other medievalists, no doubt – a questionnaire asking us if we were satisfied with the current medieval history textbooks and what changes we might like to see. As you may imagine, I knew just what to say: I wanted a short book full of maps, full of illustrations. I wanted the text to cover more than Western Europe.

And I wanted the history to be organized chronologically rather than topically. The Broadview questionnaire ended by asking whom we professors might recommend to write a new textbook. I recommended myself.

I envisioned a short history that would provide a running narrative – political, intellectual, cultural – that would give students the background they needed to make sense of primary sources. I wanted the illustrative art program to offer one set of those sources – objects so representative and useful that I hoped they might even serve as an introduction to medieval art, broadly defined.

Illustrations are expensive: photographs cost money and so do the rights to publish those photographs. In the first edition of A Short History of the Middle Ages, I was allowed to include 59 illustrations, not much more than the number in competing textbooks. Happily, the book’s designer, George Kirkpatrick, convinced the publisher to have at least some of the plates reproduced in color. And that was the start of something very new in the medieval history textbook business.

As was the map program. It is all very well to want lots of maps so that students can track the places and events mentioned in the text. But in practice new maps are extremely difficult to prepare since they must be tailored to just the materials covered and not try – as most historical atlases do – to portray lots of changes over time. Moreover, many historical atlases are specialized – portraying Western Europe or Byzantium or China – and so it is necessary to cobble together materials from a wide variety of sources that often are based on different projections and thus incommensurate. Furthermore, most cartographers are not historians, and so they wrongly think that, for example, the riverbeds and coastlines of the past were the same as those today. The first edition of A Short History of the Middle Ages had, I’m sorry to say, several faulty maps. But since then, they have been improved and are now in color.

For particular topics that can be best clarified by seeing the region talked about, A Short History of the Middle Ages now includes “spot maps.”

It even has some topographical maps, helping students see the physical reality that historical actors had to deal with.

Its extensive map and plate programs explain why A Short History of the Middle Ages seems less short than the word count of the text alone warrants. I keep that word count short because I want the textbook to be supplemented by primary sources. In 2006, I published the first of edition of Reading the Middle Ages, which provides sources pertinent to each chronological slice in order to illuminate – and complicate – the narrative of the textbook. It is currently in its third edition.

This all sounds very upbeat – an easy climb to success. But now let me admit its greatest challenge: to integrate, concretely and convincingly, developments in such disparate spheres as politics, art, and spirituality. And next comes the difficulty of juggling various societies in the same chapter. For it is not possible to consider the Islamic and Byzantine worlds as if they were of a piece with the West, however similar they may have been and however much they may have interacted. So, each chapter does have three fairly independent parts covering, respectively, the Byzantine, Islamic, and Western societies. From the first edition to the fourth, this arrangement faded out in Chapter 5, where the focus turned to Europe. But the fifth edition consciously tries to overcome the implicit teleology that makes Europe, rather than the Islamic or Byzantine worlds, the “winner” in the dynamic of world power. In the fifth edition, then, all three civilizations occupy fairly equal space throughout the book.

Today, historians are increasingly talking about a “global” Middle Ages. Incorporating this wider vision in yet another edition will necessitate new sorts of syntheses and organization; it will ask teachers to treat unfamiliar realms; and it will, not least, entail new strategies to keep A Short History of the Middle Ages truly short!

Barbara H. Rosenwein is Professor Emerita, Department of History, Loyola University Chicago. She is the author of many books, including Anger: The Conflicted History of an Emotion, Generations of Feeling: A History of Emotions (600–1700), What Is the History of Emotions? (with Riccardo Cristiani), and The Middle Ages in 50 Objects (with Elina Gertsman).