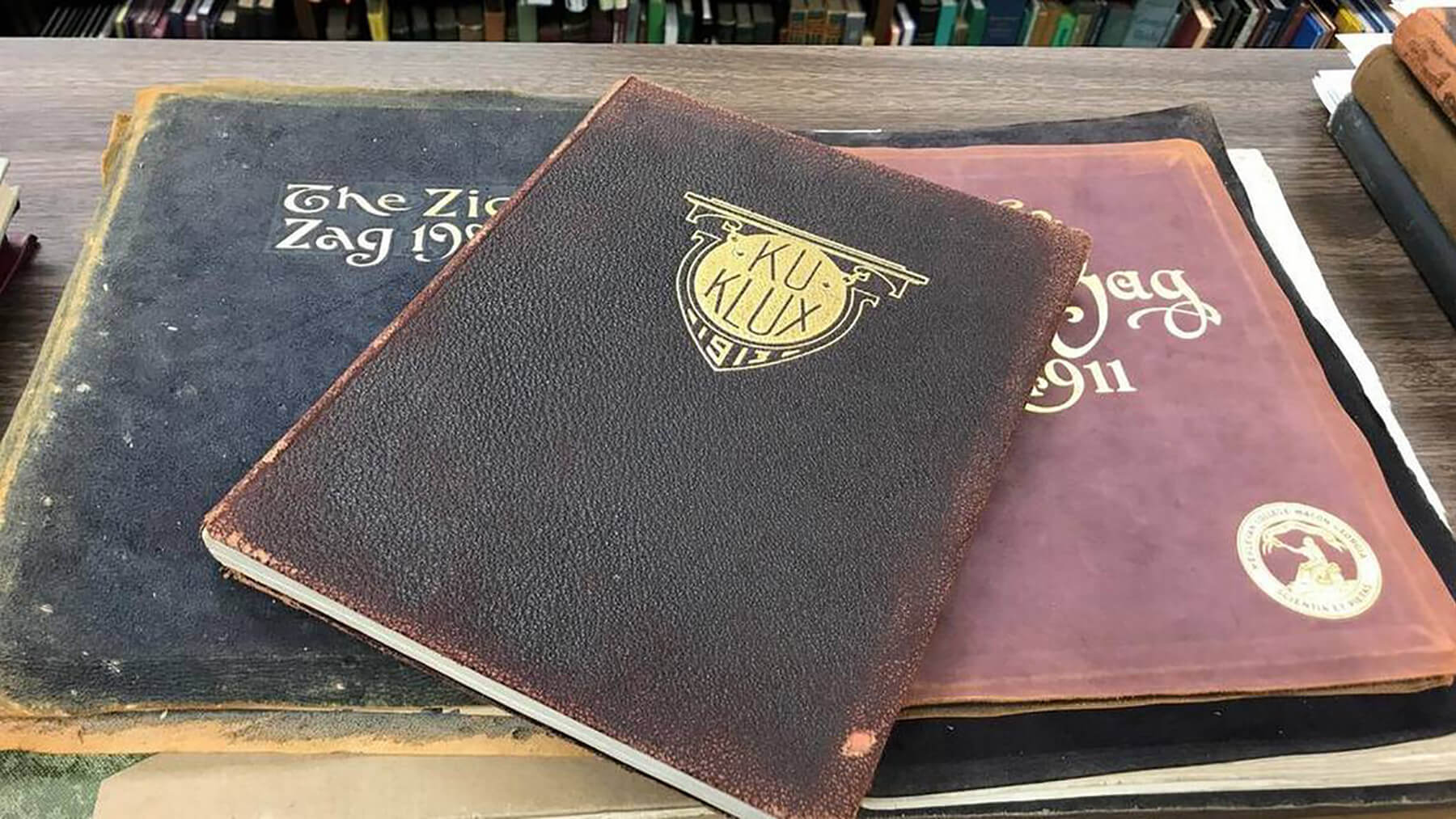 Image above: Wesleyan College’s 1913 yearbook is named “Ku Klux.” The class that year named itself after the Ku Klux Klan. Credit: Andrea Honaker for The Telegraph (July 4, 2017)

Written by Amy S. Kaufman and Paul B. Sturtevant, The Devil’s Historians examines the many ways in which the medieval past has been manipulated to promote discrimination, oppression, and murder. The book introduces readers to a more expansive Middle Ages and gives them the tools to identify and dismantle the myths about the medieval world. In this post, author Amy S. Kaufman discusses what we can expect from the book and how the project came about.

For more about the book, you can check out the website: www.devilshistorians.com 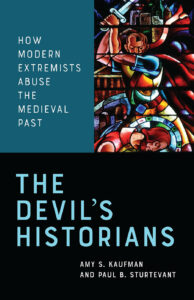 My work on the connections between modern extremism and the Middle Ages began with a relocation. In 2007, I moved to Macon, Georgia for my first tenure-track job and went looking for a house in a “starter” neighbourhood, something I could afford on my abysmal southern salary. As I surveyed the small houses with pickup trucks parked on the overgrown lawns, I was struck by the aspirational medieval street names: Galahad Circle, Will Scarlett Way, King Arthur Drive. But Macon’s medievalism wasn’t limited to one neighbourhood. Parenting guides like Balancing the Sword and His Princess: Love Letters from Your King blared medievalism from the supermarket checkout line. Teenage girls attended purity balls: medieval-themed father-daughter proms designed to celebrate female virginity. And then there was the long legacy of the Ku Klux Klan, including, to my surprise, at our small women’s college, where some of the school traditions – secret hazing ceremonies and class mascots like green and purple knights – had originated with twentieth-century students’ devotion to the KKK. Medievalism was what held all the racist rituals together: knighthood, chivalry, and sisterhood, a cocktail of hate dressed up as empowerment.

The attraction of the Middle Ages for hate groups throughout history is the focus of my new book with Paul B. Sturtevant, The Devil’s Historians: How Modern Extremists Abuse the Medieval Past. We show how extremists – from fringe organizations like the Biblical Patriarchy Movement and the Proud Boys, to regimes like Nazi Germany, colonial Britain, and the Trump administration – use myths about the Middle Ages to lend a patina of historical precedent to the violence they commit. Throughout the book, we interrogate misbeliefs about the medieval world and try to introduce readers to the richness, complexity, and humanity of the past. But more than that, we explain what the medieval period stands for in the modern mind and why it seems so integral to narratives of violence.

For instance, the medievalism I found myself swimming in when I moved to Georgia was born out of a long-held sense of loss and imagined disempowerment. Historically, white southern slaveholders had aggrandized their cruelty by pretending to be feudal lords and ladies, a cultural rebellion against the industrial north. When southerners lost the Civil War, they seized on the fantasy of knighthood offered by the Klan, with its pseudo-medieval ceremonies and ranks like “Grand Dragon” and “Imperial Wizard,” and used it to terrorize and murder the Black Americans who had so recently won freedom. And despite its outsized political voice, the contemporary southern white evangelical community embraced medievalism when it felt threatened by social progress like same-sex marriage, women’s rights, increasing demographic diversity, and the first Black president.

Why turn to medieval fantasies – specifically European medieval fantasies – in the United States, of all places? The answer lies in the outsized, almost mythic personality the Middle Ages have in the modern world. From the KKK to the “alt-right,” from the United Daughters of the Confederacy to the Islamic State, and even on medieval television shows like Game of Thrones or Vikings, the Middle Ages seem powerful. Medieval men are seen as strong, if barbaric; medieval law absolute and unforgiving; medieval rulers firm, if violent; medieval warriors unstoppable, if brutal. Anyone who feels disempowered – even if they quite clearly, as in the case of white supremacists past and present, are not – can find solace in an imagined history of strength and domination, a “once-upon-a-time” in which they believe they would have ruled supreme. That power can be seductive, even when we know better, even when that history is a lie – even, as in the case of white women’s devotion to the KKK, when it requires subordinating ourselves in order to empower someone else.

These fantasies of the Middle Ages are based on an image of the medieval world that is limited, at best, and at worst, deeply flawed. But that’s because the longing for medieval power is in many ways ahistorical: it has very little to do with the actual past, and a lot more to do with people’s desire for the future, and where and how they hope to situate themselves within that future.

Social progress is, unfortunately, not linear. When a society contracts, drawing in on itself to fight progress, it looks backward, often to a mythological vision of the past – such as a desire to “make America great again” by dragging us back into a stifling, dangerous time when white male power was unchecked. Now, in an era often declared “post-facts,” it is even more crucial to be clear-eyed about history. That means evaluating whose stories we tell and whose have been left out when we talk about the past. What would happen if white American students learned about the Red Summer of 1919 alongside the Red Scare, the Tulsa massacre and immigration quotas along with Prohibition and the 19th Amendment? Would they have listened when Black Americans, many of whom knew this history, tried to warn them that white supremacy was making a violent comeback? Would it have taken over a century to get rid of statues celebrating slaveholders and confederate generals? Would “MAGA” have been seen for what it is by more American journalists – a racist battle cry rather than the lamentation of economic anxiety?

Paul and I wrote The Devil’s Historians because we believe it is equally important to be clear-eyed about the medieval past. Our book strips away the myth of an all-white, all-Christian, all-European, patriarchal Middle Ages because we believe that if we tell the stories of medieval women, of medieval LGBTQ+ lives, of a global Middle Ages, of a multi-faith and sometimes interfaith medieval world, we might better understand where to find hope for the future, and where to find dire warnings. But we are also careful not to idealize the past in yet another false narrative. Medieval history is rich and full, diverse and variant, alternately optimistic and tragic. What we hope is that this book will introduce readers to a more expansive Middle Ages and give them the tools to identify and dismantle the myths about the medieval world spread by racist memes, political propaganda, and popular culture.

The medieval world is often treated as a radically different, unknowable era, a “Dark Age” that is nothing like our own. But medieval people were human, just like we are. They were compassionate and cruel, diverse and varied, ignorant and wise, just like we are. That means we can learn from them – not because the past was an idyllic paradise that we should recreate, and not because it was a barbaric wasteland we should avoid, but as part of our long legacy of humanity and inhumanity. Exploring the Middle Ages in all its variations and voices can show us the incredible heights of compassion and wisdom we can reach if we try, and the terrible depths of violence and cruelty we can sink to if we don’t. If we want a better future, we need to listen to all the voices from the past, instead of clinging to the myths that make us feel strong.

Interested in finding out more about The Devil’s Historians? Click here to read an excerpt from the book.

To request exam or desk copies of this or any other UTP title, please email requests@utorontopress.com and be sure to include the course name and number, start date, and estimated enrollment.

Amy S. Kaufman is a scholar of medieval studies and popular culture and co-author of The Devil’s Historians: How Modern Extremists Abuse the Medieval Past.

To Confront the Climate Crisis, Team Humanity Should Stop Relying on Cooperation and Instead Fund Innovation
On Light in Dark Times: Art and Anthropology in Graphic Form