Home > Blog > On the Darkness in Light in Dark Times 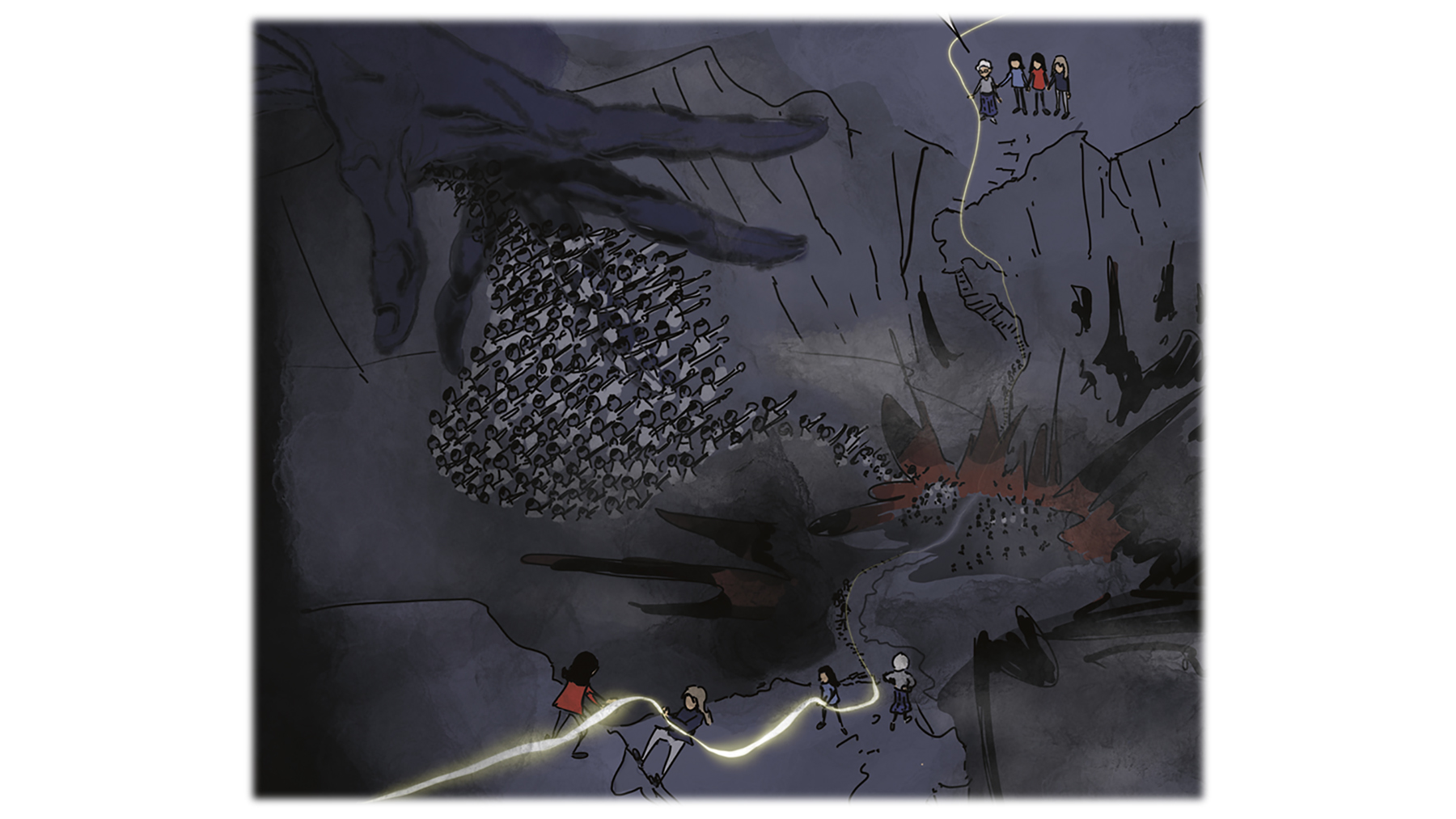 Written by Alisse Waterston and illustrated by Charlotte Corden, Light in Dark Times: The Human Search for Meaning is an illustrated journey across time and space that provides a lifeline of hope during these difficult and uncertain times. In her second post for the blog, Alisse writes about the current problems the world faces and why we must confront these dark times to seek and create an alternative world from the one in which we now live.

Again, we’ve included a discussion guide and drawing exercises at the bottom of the post.

No doubt these are dark times.

One does not need to look far to see that the present-day world is marked by a lethal pandemic, worship of weapons and ever-expanding militarism, racialized hatred and nationalist fervor, environmental crisis, and everyday structural violence.

This is not a new condition. It has taken time, intention, and the logics of a global, capitalist political-economy to arrive at this moment. Worldwide, an estimated 821 million people go to bed hungry and undernourished each day, there are 79.5 million forcibly displaced people (a number that grows exponentially even as I write this with nearly 10 million more than we document in Light in Dark Times), 801,000 people have died since November 2001 as a direct result of war in major war zones, an estimated 972,000 deaths worldwide (over 200,000 in the US) from the coronavirus pandemic with nearly 32 million positive cases in the world, and there is irreversible climate damage, devastating economic collapses, rampant power abuses, and other forms of brutality and dehumanization, including the pathologies of xenophobia, racism and sexism.

It is not uncommon for individuals and nations to engage a process of “coming to terms” with their dark past, a process that generally comes decades past the wars, genocides, enslavements, and incarcerations. “We didn’t know” is an oft-repeated claim. The claim is too little and too late for those who perish and for those who remain, wounded and traumatized.

Light in Dark Times disables such claims of innocence and ignorance. In it, we confront the darkness, exploring with philosophers, anthropologists, poets, and activists its causes and consequences. Those who pick up this little book of art and anthropology cannot declare later that they just didn’t know. We ask of ourselves and by implication of our readers, “How do I want to be human?”

The darkness is painful. For those in the direct line of violence, there is no looking away from it. That’s not an option. For those who are comfortably situated, shielded from the violence, it is easier to look away especially when encouraged by the cover-ups of purposeful political obfuscation and pointless trivia.

The darkness in Light in Dark Times demands to be looked at, seen, perceived, understood, and felt. The book is a song of sorrow, a lament for human suffering and for the sense of impotence many people have in the face of it, even as we know that the suffering is preventable.

Light in Dark Times also asks, “What is to be done? What actions can we take to effect positive social change that prioritizes human needs over rapacious interests?”

It starts with knowledge.

And it requires imagination. Taking up Eduardo Galeano’s challenge to exercise the right to dream, we call on readers to couple knowledge with fearless imagination to work on behalf of a livable future that has yet to come. Ours is an urgent, multidimensional task to face the profound challenges facing humanity, transcend seemingly impossible impasses, build productive connection and collaboration, and be responsible global citizens who put knowledge to work in the effort to sustain the earth and the living things in it.

Light in Dark Times: The Human Search for Meaning is now available to order through our website.

Alisse Waterston is a Presidential Scholar and Professor of Anthropology at John Jay College of Criminal Justice, City University of New York (CUNY).

The Rapids: Ways of Looking at Mania (Part 2)
A Climate Change Manifesto for University Education