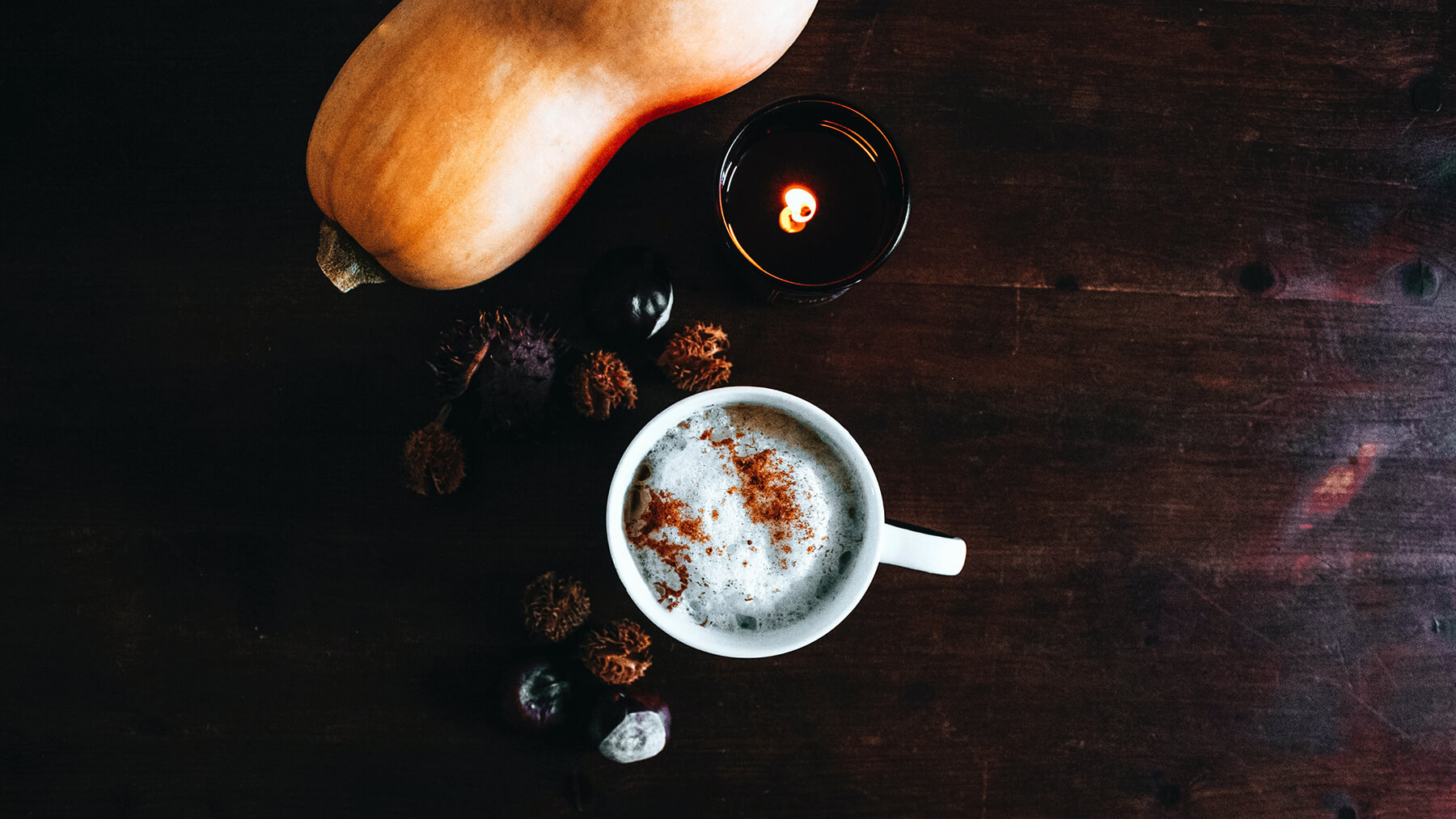 Seasonal Sociology is a brand-new textbook that offers an engrossing and lively introduction to sociology through the seasons. Thinking about the seasons sociologically opens up a unique perspective for studying and understanding social life. 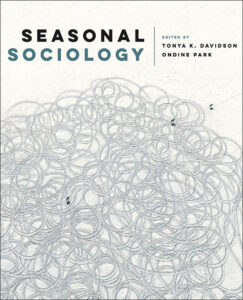 Autumn is one of my favourite times of the year. The leaves begin to turn yellow, orange, and crimson. The cool morning air smells fresh and crisp. University campuses buzz with the excitement of new students at the start of the academic term. And as if on cue, Starbucks’s pumpkin spice lattes appear on the coffee menu to mark the seasonal shift. There is something about the smell and taste of pumpkin spice that evokes a sense of fall, especially in the form of a warm, caffeinated beverage. Since its introduction in 2003, Starbucks’s pumpkin spice latte has become, for many, a seasonal ritual that helps mark the transition to autumn and its principal Thanksgiving-Halloween holiday.

Brands and seasonal consumption are the focus of this chapter. All sorts of brands, from Cadbury to Coca-Cola, have become important elements in the making and marking of seasonal traditions and holidays. In the first half of the chapter, I discuss the commercialization of seasons and the development of seasonal branding. Taking the case of Starbucks and their pumpkin spice lattes, I suggest that brands, through seasonal marketing, not only extend but also establish elements of seasonal traditions. In the second half, I consider some of the ways in which individuals partake in seasonal consumption and use branded goods to celebrate seasonal holidays and transitions. This section traces how consumption practices such as imbibing and sharing photos of the pumpkin spice latte are used to express social identities and establish a sense of belonging. Overall, I argue that seasonal branding and consumption practices in the contemporary marketplace constitute key elements of seasonal activity, shaping how we mark and experience seasonal transitions and time.

This chapter will be mainly based on documentary research, especially drawing on existing case studies of seasonal consumption practices and the meanings people make of them. It also draws on material from empirical studies I conducted on major coffeehouse brands in the Canadian cities of Toronto, Vancouver, and Winnipeg. This material includes qualitative data from over 34 interviews with Starbucks consumers, as well as extensive participant observation of the branded cafés. In addition, the chapter incorporates material from Starbucks’s branded sites on social media, such as Twitter.

Starbucks’s pumpkin spice latte is a poignant example of this trend of seasonal branding. Starbucks is a US-based specialty coffee brand that provides customized coffee in a café environment designed to encourage social interactions and invoke a sense of community. The popular brand also promotes a certain coffee connoisseurship, with an emphasis on coffee origins, style, and roast, along with the cultivation of a specific Euro-latte lingo (using terms like venti to indicate coffee size) among baristas and consumers alike (Bookman 2014). As an extension of its specialty coffee menu, Starbucks has introduced a range of seasonal coffees, which are served in holiday-themed take-away cups according to seasonal intervals. The pumpkin spice latte, for example, is a seasonal luxury coffee made with pumpkin-spice flavoured sauce (without any actual pumpkin until 2015) and offered in autumn (Powell and Engelhardt 2015). It evokes key elements of the Thanksgiving-Halloween holiday, such as the tradition of pumpkin carving at Halloween as well as the ritual of eating pumpkin pie at Thanksgiving. Interestingly, pumpkin consumption, unlike the consumption of many other fruits and vegetables that are increasingly made available year-round, is almost entirely limited to the festivals of Halloween and Thanksgiving in the United States (and in Canada, to an extent, as well) (Powell and Engelhardt 2015). There is a clear seasonal association between pumpkin, its spiced-up flavours, and fall (see Waldrop with Mogelonsky 1992).

Starbucks’s pumpkin spice latte illustrates how brands tap into or appropriate existing seasonal conventions and traditions to position themselves as sites of seasonal celebration. Douglas Holt’s (2004) theory of brands as cultural icons, or “iconic brands,” provides insights into the relationship of brands to seasonal meanings and activity. For Holt, cultural brands involve the performance of an identity myth – a set of cultural ideas and sentiments about masculinity, nationality, and so on – and are adapted by consumers for their expressive capacity (Holt 2004). The most successful brands, in this scheme, are those that offer a “compelling symbol of a set of ideas or values that a society deems important,” and that translate into identity value for consumers who use such brands as a means of self-expression (Holt 2004). Holt (2006) explains that cultural brands such as Starbucks operate as “ideological parasites” that draw on existing cultural ideas to establish brand symbolism and meaning. In this way, brands do not necessarily invent new ideas and manipulate culture as such; rather, they appropriate, modify, or extend established cultural ideas. In the case of seasonal branding, then, brands might not invent the ideas bound up with seasonal cycles, but they may reinforce, refine, or rework them by offering variations on key elements of a seasonal tradition, or they might expand the range of attributes (rituals, material objects) encompassed by a seasonal holiday (see Miller 1993). Starbucks, for instance, did not invent pumpkin-themed autumnal traditions, but it did adapt the pumpkin spice flavour associated with pumpkin pie to a portable luxury coffee drink – which bolsters its image as a purveyor of fine coffees and creates a source of community around which individuals can partake in seasonal festivities and create a common experience of fall. For many Starbucks consumers, the Thanksgiving–Halloween holiday now includes consuming a pumpkin spice latte in addition to the more established attributes of carving a pumpkin, eating pumpkin pie, and going trick-or-treating.

According to Holt (2006), strong cultural brands are especially effective at proselytizing the ideas they adapt. They are able to expand cultural ideas (and practices) that resonate with customers through “the sheer weight of their marketing spend” (Holt 2006). The tremendous popularity of Starbucks’s pumpkin spice latte can be seen in sales: over 200 million pumpkin spice lattes were sold in the first 10 years, from 2003 to 2013 (Maynard 2013). However, Starbucks can also be understood as a hegemonic brandscape that not only structures a particular market but correspondingly shapes consumption by acting as a “cultural model that consumers act, think, and feel through” (Thompson and Arsel 2004). Hegemony is a concept that derives from the work of Antonio Gramsci and refers to the way a particular group (or, in this case, a brand) maintains power over subordinate groups through a process of negotiation and struggle, in which the dominance of the group (in this case, market share) is established by gaining widespread support (of consumers, in this instance) (O’Shaughnessy and Stadler 2012). For additional discussion of this concept see Ondine Park’s discussion of hegemony and the white wedding in chapter sixteen. As a hegemonic brandscape, Starbucks exerts powerful influence on both local competitors and the socio-cultural milieus of local coffeehouse environments. Based on its dominant position as a global brand, when Starbucks introduces a trend such as the pumpkin spice latte, local coffeehouses tend to follow suit. Further, the hegemony of Starbucks is achieved through consumer involvement with the brand: persuaded by the pleasures of consuming Starbucks coffees and its branded environments, and how we use the brand as a cultural resource to celebrate autumn with a pumpkin spice latte, we acquiesce to its power. Influencing widespread shared seasonal practices, Starbucks is spun into the culture, shaping seasonal activity, experiences, and meaning.

Click here to read the full chapter from Seasonal Sociology.

To request exam or desk copies of Seasonal Sociology or any other UTP title, please email requests@utorontopress.com and be sure to include the course name and number, start date, and estimated enrollment.

What’s Missing in the New Federal Climate-Change Plan?
The Rapids: Ways of Looking at Mania (Part 2)