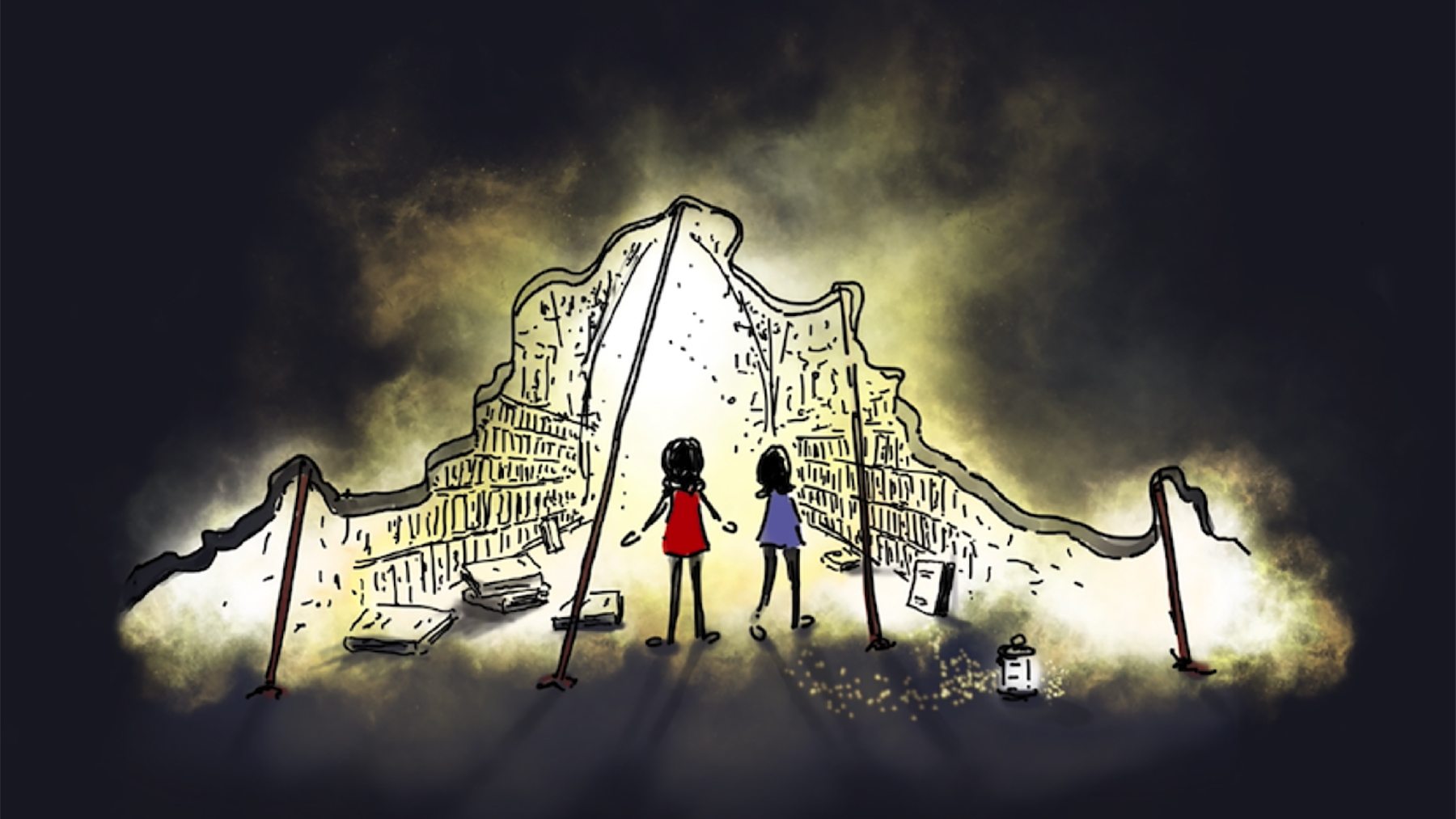 It’s day two of the University Press Week blog tour and today UPs are highlighting the creative voices within the community. So who better to turn to than Charlotte Corden, illustrator of the stunning new ethnoGRAPHIC book, Light in Dark Times. The book is a profound work of anthropology and art, designed for anyone yearning to understand the darkness and hoping to hold onto the light. The book is also part of our ethonoGRAPHIC series, which speaks to a growing interest in comics as a powerful narrative medium and a desire for a more imaginative and collaborative ethnography.

In this post, Charlotte discusses the Light in Dark Times project and what it’s like to create illustrations around some of the most complex topics we deal with in today’s world. 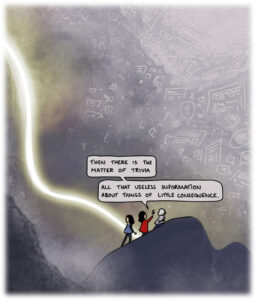 The illustrations that make up Light in Dark Times grapple with some of the most profound and difficult issues facing our world today. Through drawing them, I have tried to make sense of the calamities that dominate our society, and offer a stream of light to those who dare to dream of a better future. My hope is that these issues and ideas, visualized as they are, might help others to see anew, and inspire fresh possibilities in a world where seeing the truth has become increasingly difficult.

I began my collaboration with Alisse Waterston in January 2018. Alisse had given a speech to thousands of anthropologists and I was in the audience amazed at her words, their rich imagery, and the honest human experience of our world that she described. She spoke about ideas that I immediately wanted to know more about, like “darkness hidden in plain sight,” the “obfuscation of trivia,” and “the will to resist.” She spoke about the hopelessness that we feel in our own insignificant abilities, she highlighted the importance of lament, and offered words to use when conflicted by the inequalities of our blatant privileges when held up against the suffering of so many in these times. And amidst all the darkness she spoke of the powerful hope we have in our collective ability to work towards a process of mutual understanding on a gigantic scale. 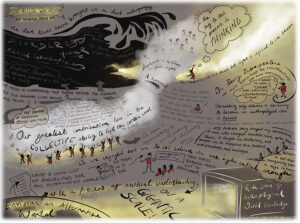 In previous years I had begun to use drawing as a means of unraveling complex philosophical ideas. Drawing became a tool for thinking and describing beyond words, and here I had been given a visually rich, complex, and meaningful message. It was my ideal starting point for an illustration. That evening I drew her speech in sketch-note format as best I could, pulling it apart visually, and putting the pieces back together to create an image underneath her message. I wanted to find the visual thread that knit her words together, I wanted to “see” what she had said.

After sharing the illustration, Alisse got in touch. Would I consider working with her to turn her speech into an illustrated book? It would be my first illustrated book in collaboration with an awesome anthropologist whose life’s work had been wrapped in a beautiful message I had barely begun to interpret. It would be an honour. 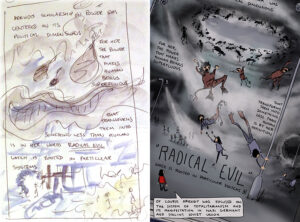 We began months later in Alisse’s basement. It was important that the images I created were a true reflection of the meaning behind her words and the words of others that were quoted in the book. But how does one begin to draw concepts like “radical evil,” “trivia,” and “the will to resist?” There were moments of great frustration as I sought to illustrate what the consequences of detachment vs engagement looked like, or “the power that makes human beings superfluous.” The question I would often ask myself was how much of a realistic portrayal of events should I attempt, and how much should I keep the visuals abstracted and generalised? For example, I had originally sketched radical evil as a character of darkness with a gruesome face-like grin, but in context with Alisse’s words, it was too cartoon-like. The seriousness and reality of radical evil and Hannah Arendt’s writings about radical evil had to be honoured, and so the illustration became a disturbing picture of humans being made less than human, much closer to the reality that Hannah Arendt writes about. 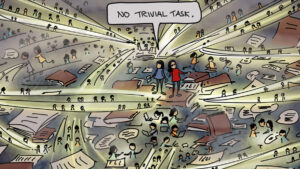 Light in Dark Times is my first significant attempt as an artist to investigate how drawn images can enhance the truth of words and bring a different understanding of their meaning. I used every faculty and technique of drawing that I have been taught, to put together scenes and scenarios that were both representative of the ideas being spoken about, and tied the book together as a whole.

It is hard to describe exactly what this book is, because there is no other like it. It is a fusion of Alisse Waterston’s inspirational anthropological insight and wisdom, the writings and commentary of other significant historical and current characters, and my own attempt at comprehending and uniting their academic theory into a visually engaging and cohesive whole. We use illustration to break the boundary between academic writing and the graphic-genre in order to open up discussion and engagement with one of the most profound and important questions we must ask ourselves in our lifetime: “What does it mean to be human?” 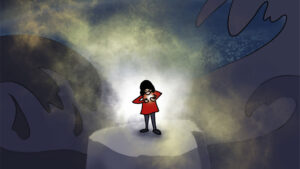 At every stage it was the writing that inspired the drawing, and it is no exaggeration to say Alisse’s words have changed my life. Through investigating how to draw prejudice, I have had to face my own prejudices. Often, when I see events taking place on the news, in my mind I turn to the relevant page of Light in Dark Times, lamenting that “even anger against injustice makes the voice grow harsh,” thinking that to make a difference I must “get proximate to human suffering,” and when I see swathes of people acting in ways I can barely comprehend, I think back to Alisse’s words: “ they are afraid of alienation and desire protection,” and I know I ­must turn to myself and ask the central question: “How do I want to be human?”

To continue on Day Two of the University Press Week Blog Tour, check out posts by these other fine university presses.

Charlotte Corden is an illustrator and fine artist whose work often centres around what it is to be human. She is the illustrator of Light in Dark Times: The Human Search for Meaning.