Home > Blog > Before a Saint, A Man: Disability in the Life of Francis of Assisi 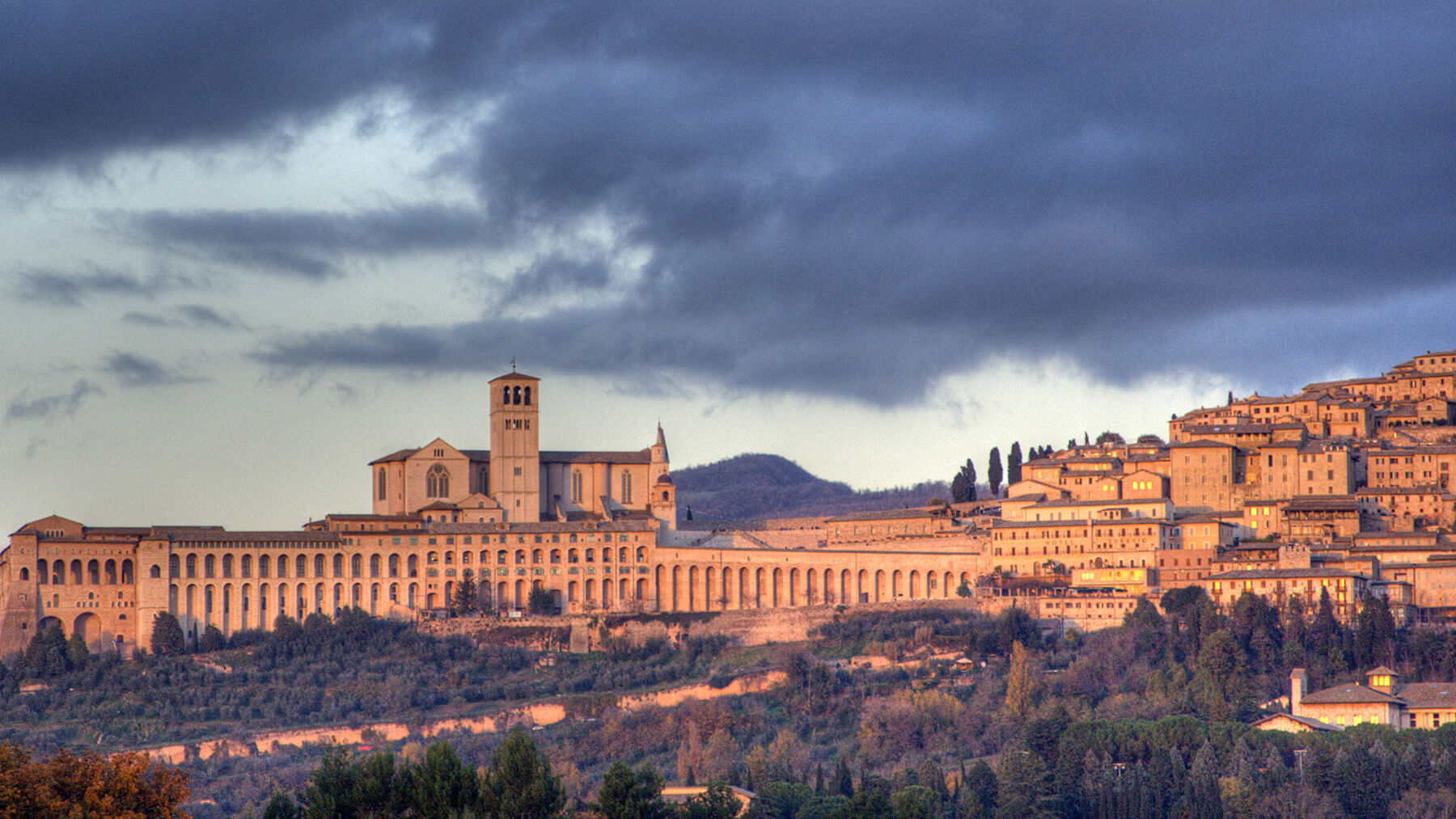 Main image above: A photograph of medieval Assisi, with the Basilica dedicated to Francis on the West side of the city. Credit: Wikimedia Commons.

Written by Donna Trembinski, Illness and Authority examines the lived experience and early stories about St. Francis of Assisi through the lens of disability studies. In this post, Trembinski discusses more about her book that shows us another, less readily seen side of this famous saint. 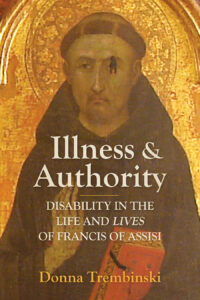 When I told fellow medievalists I was writing a book about the thirteenth-century saint, Francis of Assisi (ca 1180–1225 CE), most groaned and said a variation of “we don’t need another book about Francis”. On the surface, this seems to be true. Francis is one of the most popular and beloved medieval saints. He is also one of the most studied. The University of Toronto library catalogue lists some 745 books and more than 9,500 articles in their catalogue alone. Surely my book isn’t necessary?

I like to think, however, that it IS necessary because it brings new insights to an old topic and an older saint. In Illness and Authority: Disability in the Life and Lives of Francis of Assisi, I demonstrate with concrete examples how engaging with disability as a category of analysis – “another other,” as Catherine Kudlick called it – can further nuance our understandings of the past.

Although Francis founded three religious orders, all of which still exist today, he is most famous for his personal and affective piety. He loved nature, so much so that he once wrote a sermon and gave it to a flock of birds. He showed his devotion to the Holy Family by creating the first nativity creche – in a church, with live animals, if the sources can be believed. Towards the end of his life, Francis was reputed to have received the stigmata, the wounds of the crucified Christ, during a mystical vision. Many academic works have been written discussing Francis’ new brand of piety, his influences and how he, in turn, influenced piety and devotion in the Catholic Church after his death. Few, however, reckon with the reality that Francis’ health was almost certainly compromised from his early adulthood and continued to worsen throughout his life, until, on the eve of his death, he was so infirm he could not walk, was suffering from unspecified illnesses of the spleen, liver, and stomach, and had a significant visual impairment.

So what? Does it matter that Francis was sick and infirm for his life story, for his history? In Illness and Authority, I argue yes, it does matter. Because once we centre Francis’ illnesses and impairments, we start to see the ways they impacted how Francis lived and his ability to lead his order. This also brings into focus just how closely Francis’ early hagiographers managed the saint’s image by minimizing the reality and impacts of Francis’ illnesses in later lives in order to ensure that Francis accorded more with the expectations his audience had for a founder-saint. Although my book discusses many such examples, I’ll outline only one here.

Sometime after Francis visited Egypt during the Fifth Crusade in 1218–1219, he began to experience loss of vision. His visual impairment, along with other unspecified infirmities resulted in his resignation between 1220 and 1222. By 1224, two years before the saint’s death, Francis’ visual impairment had become a concern, not necessarily for Francis, but for those in the bureaucratic hierarchies of the Franciscan Order and the Roman Catholic Church. Sometimes regarded as a sign of a person’s refusal to see the truth of God’s grace, or as an impediment to performing mass, Francis’ blindness worried those in positions of power so much, they ordered him to seek out treatment. He spent the last two years of his life in a constant search for treatments and cures, moving around Northern Italy to see doctors and often travelling in the company of a doctor when he did so.

Francis’s resignation and his willingness to seek out treatments after being ordered to do so, when discussed at all, are most often couched in his desire for humility and to be bound to the will of God and his representatives in the Church. This reading occurs in both medieval and modern sources. Yet, if we start to read the earliest sources for Francis’ life closely, this time attuned to the lessons the social model of disability teaches us – that societies and peoples can put barriers in place that prohibit people with infirmities from fully participating in society – we can begin to see that there might be an alternate explanation for Francis’ actions. For instance, we know that Francis sometimes resented his inability to lead the Franciscan Order and, after his resignation, took to writing letters to make his wishes known. In the Assisi Compilation, perhaps the most reliable source for the later part of Francis’ life, the saint laments that he was too ill to go to the general chapter – the yearly meeting where the Order’s governance took place. “Who are they who stole my religion and my brothers from my hands! If I had gone to the chapter, then I would have shown them what I will,” says Francis (Assisi Compilation, Chapter 44). Evidence such as this, read with an eye to social models of disability, allows for a radical new reading of Francis’ resignation – one that suggests it was not voluntary and not done out of a sense of humility at all. Instead, perhaps his resignation was encouraged by other leaders because of legal and social expectations that religious leaders be in good health.

Such expectations were not necessarily absolute. There was space for priests who had become blind in the course of their working lives to continue working or at least to continue receiving an income, for instance. There was also a long tradition of infirm and/or visually impaired priests, abbots and bishops having their duties carried out by coadjutors or stewards, even as they kept access to their benefices as sources of income (on this, see the work of Dr. Ninon Dubourg). It is not a stretch to see how Francis may have found himself encouraged to resign from active leadership and in the position of having a vicar. Indeed, while Francis referred to his replacement, Elias of Cortona, as minister-general of the Franciscan Order, the Church, in all correspondence, called the new leader of the Order a Vicar-General. This important distinction signalled that in the eyes of the papal bureaucracy, Francis was still the Minister-General, but his duties were being carried out by his vicar as was appropriate for someone whose health prevented him from maintaining his position.

Francis’ letter-writing campaign and his angst about being unable to attend the general-chapter to set his Order to rights suggest we may need to look beyond Francis’ supposed (and constructed) humility to find other reasons for his abrupt withdrawal from leadership. Francis’ illnesses, in concert with an understanding of how canon law regulated ill clerics and how medieval Umbrian society perceived illness and infirmity amongst religious leaders provides us with another possible reason – his resignation was strongly encouraged by those in authority within the Order and the hierarchy of the Roman Catholic Church who saw Francis’ impairments and his blindness as barriers to carrying out his role as a founder and leader of a popular religious order.

This, then, is the value of engaging with disability as a category of analysis. It allows us to see other possibilities in the past, and is a useful tool in deconstructing traditional and long-held narratives. Such a reading has the power to reorient historical perceptions of the saint. It is not a corrective, but it is a perspective that adds depth to our understanding of past figures like Francis.

Click here to find out more about Illness and Authority: Disability in the Life and Lives of Francis of Assisi.

Donna Trembinski is an associate professor of Medieval History at St. Francis Xavier University and author of Illness and Authority: Disability in the Life and Lives of Francis of Assisi.

An Excerpt from Work Your Career
Raise UP: Rae André