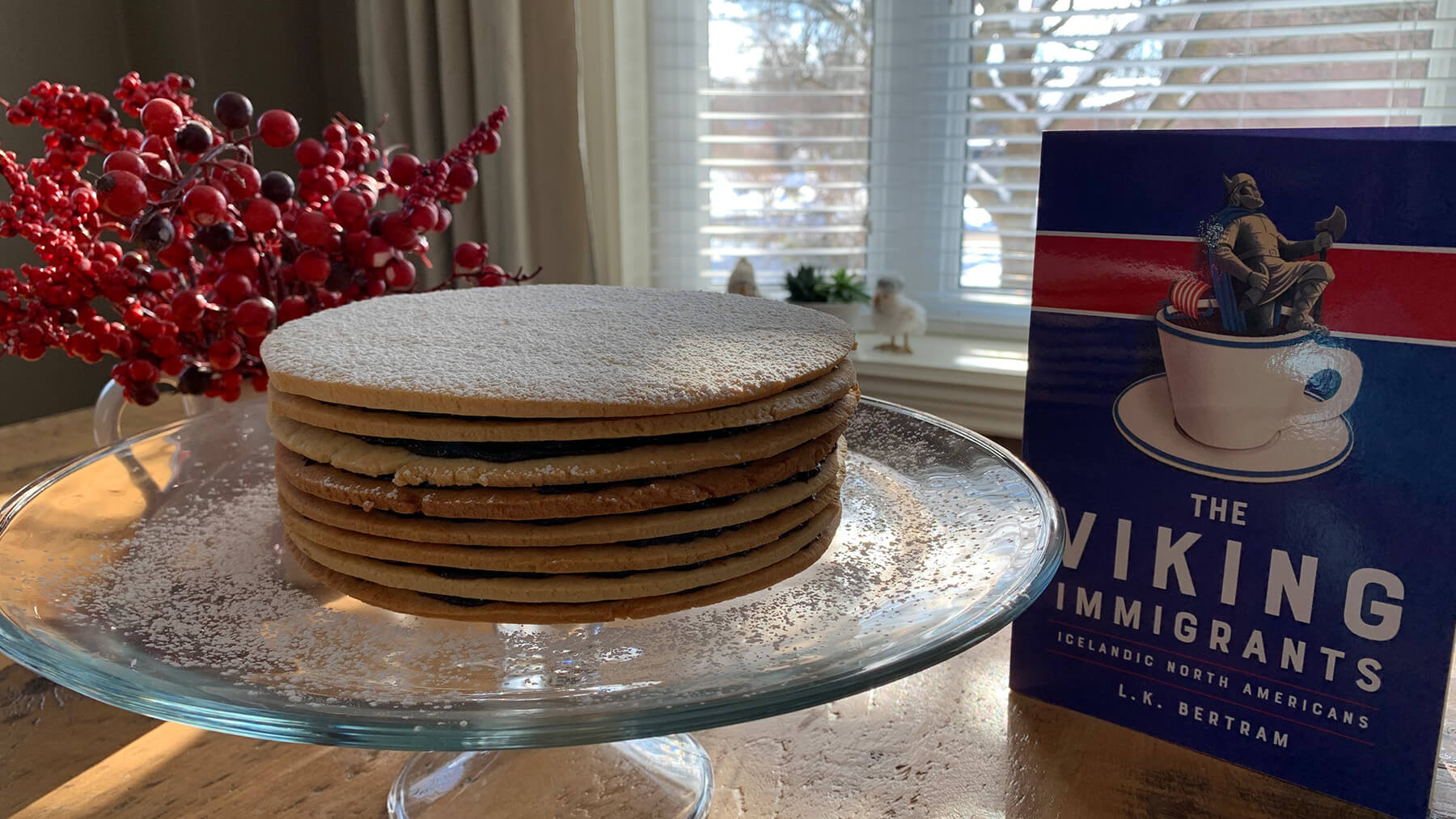 If you’ve been watching UTP’s calendar of events, you may have noticed that we recently launched The Viking Immigrants: Icelandic North Americans by L.K. Bertram at a very special virtual event that featured the First Lady of Iceland, Eliza Reid, as well as Jewells Chambers, host of the fabulous All Things Iceland podcast. We were inspired at this book launch to attempt the most famous of all Icelandic North American holiday cakes: vinarterta (aka the “striped lady”). So, using one of the historic recipes included in the book, we took the challenge to UTP’s Test Kitchen. 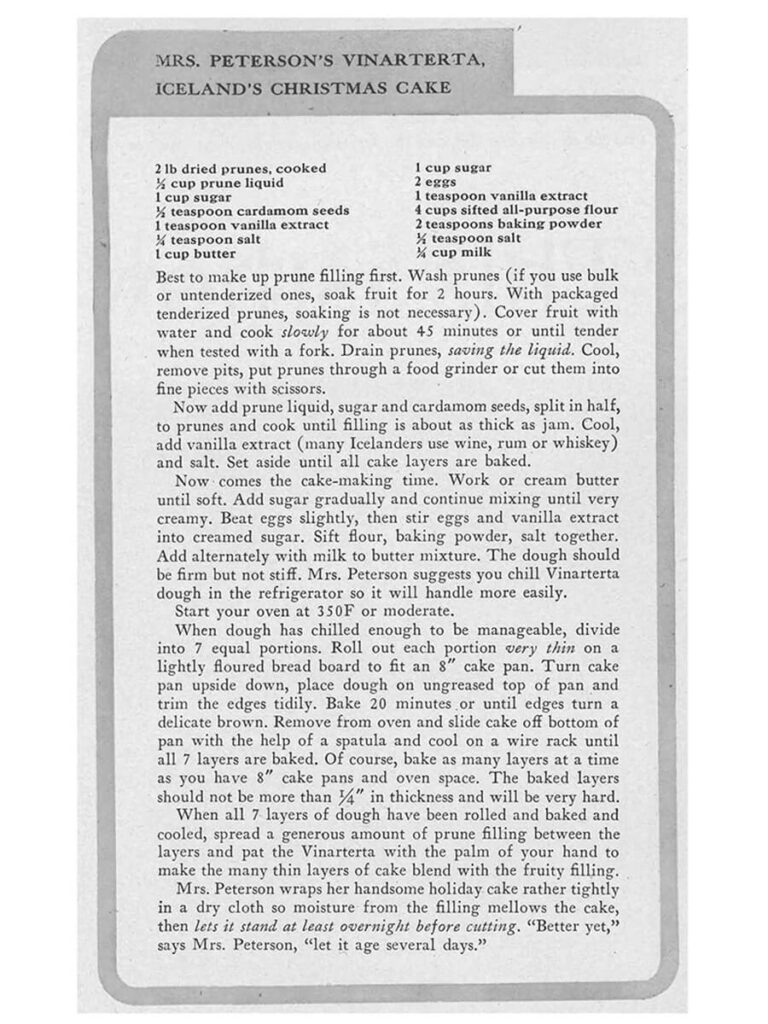 With many recipes to choose from, we selected “Mrs. Peterson’s Vinarterta” from 1949 (which is oddly similar to Martha Stewart’s recipe). Don’t be fooled by the fact that this cake has many layers – it’s actually quite easy to bake and Mrs. Peterson is an excellent guide. The only ingredients that you might not already have in your pantry are prunes (finding packaged, pitted prunes shouldn’t be that difficult) and cardamom (here’s a quick and easy video on how to remove and crush the seeds). Follow Mrs. Peterson’s steps in order and you should end up with a perfect Icelandic Christmas cake (our cake ended up exceeding the number of layers specified, but more cake can’t be a bad thing!). We highly recommend that, as Mrs. Peterson says, you “let it age several days” before cutting into it and enjoying it!

And for your reading pleasure, here’s a short excerpt from the opening of Chapter 5, “Icelandic Cake Fight: A Brief History of Vínarterta.”

“Say Vínarterta in a room full of the descendants of North American Icelandic immigrants and quarrels begin. In Canada, Vínarterta is in six or seven layers, flavoured with almonds, frosted with butter cream – wrong! One lady (with a Norwegian half in her family) used apricots instead of prunes between layers – wrong! Some leave out cardamom – oh-so-spicy, you know – wrong!”

Bill Holm, The Heart Can Be Filled Anywhere on Earth

Vínarterta, a fruit torte imported to North America by Icelandic immigrants in the 1870s, can still inspire heated debates among their descendants. This little dessert emerged as a powerful symbol of Icelandic immigrant culture and history in the twentieth century, and it often appears as an essential centrepiece at major celebrations within the community. However, as Bill Holm observes above, vínarterta is as much a symbol of tension as unity among Icelandic North Americans. Many community members possess unusually strong opinions about the “correct” recipe for the torte and view preserving a particular recipe as a powerful symbol of both cultural integrity and family identity. Many Icelandic North Americans who produce (and consume) vínarterta strictly avoid any alterations to their recipe. Even small changes or variations in preparation, such as including thicker layers or icing, can incite fierce debate. But this obsession with vínarterta is perhaps most unusual because it has created a kind of culinary time capsule. Production of the torte declined and virtually died out in twentieth-century Iceland.

This chapter explores the history of the torte and discusses its emergence as a powerful symbol of Icelandic immigrant culture in the community. Using cookbooks, immigrant memoirs, oral history interviews, and an analysis of narratives of mourning and commemoration, which help reveal some of the other meanings of this popular dessert, it begins with a discussion of the tangled origins of vínarterta in eighteenth-century Denmark and nineteenth-century Iceland. It then explores how and why it emerged as a public symbol of the Icelandic North American community during the 1940s and the Cold War, as anti-ethnic sentiment waned and North American interest in Iceland grew. Yet it is clear that this little dessert is more than just a prop in heritage campaigns. Vínarterta retains a deep meaning for community members. This final chapter explores how community members themselves have interpreted the meaning of this new public symbol as well as the role of the “striped lady” in more complex, private commemorative cultures. Although it may have appeared in public displays that promoted Canadian and American national narratives of wartime hospitality or post-war pluralism, this souvenir from the earliest days of the community often possessed very different meanings in private.

For many Icelandic North Americans, vínarterta is an easily accessible and edible souvenir of the late nineteenth-century Iceland their ancestors left behind. Indeed, most of the foods found in Icelandic North American kitchens and bakeries retained the imprint of the styles en vogue at the time of emigration as well as those of the physical conditions that shaped food culture in nineteenth-century Icelandic kitchens. For example, rúllupylsa (rolled spiced lamb) and harðfiskur (dried fish eaten with butter), still produced and consumed around New Iceland, were based on food staples more easily produced in the homeland. Other foods reflected the demands of working in traditional Icelandic kitchens. Before modern stoves were popularized in twentieth-century Iceland, most turf households relied on raised, open stone hearths that had changed relatively little over the centuries. Consequently, the culinary repertoire of the immigrant generation was dominated by baked goods that could easily be made over an open hearth in a pot or pan, fried in oil, or baked in a makeshift oven, including pönnukökur (pancakes), kleinur (knotted donuts), and the thin, baked layers of dough required to make vínarterta.

Layered desserts like vínarterta and randalín, a similar cake-like dessert with fewer layers still found in twenty-first-century Iceland, not only reflected the conditions in nineteenth-century Icelandic kitchens but also changing economic conditions and styles particular to the period of mass emigration. Making vínarterta relied almost exclusively on having access to imported dried fruits and spices, rather than home-grown foods, and signalled a general improvement in Icelanders’ access to international markets, goods, and disposable income in the second half of the nineteenth century. Although harsh conditions preceded emigration in the 1870s and persisted through subsequent decades, Sigurður Gylfi Magnússon reminds us that after Danish trade restrictions were lifted in 1854, some Icelanders also enjoyed a remarkable period of economic opportunity and growth. During this time, a new Icelandic merchant and entrepreneurial class emerged, and women in those families enjoyed greater access to imported goods and foods as well as the means to explore new styles of food production.

The popularity of vínarterta among members of the North American immigrant generation signalled their origins in an Icelandic society in which Denmark, in many respects, still set the standards of style and sophistication. Fine, continental-style baking was most commonly associated with the households of Danish merchants and officials in Iceland as well as the Icelandic elite, many of whom had been educated in, or had ties to, Denmark. By the mid-nineteenth century, these fashionable continental goods and styles had become more accessible for some Icelandic households as economic conditions improved. As Carol Gold has documented, the publication of cookbooks written for housewives and households in Denmark flourished in the early nineteenth century. These newly printed collections of recipes from Copenhagen’s kitchens tightened the culinary links between Iceland and Denmark as they began to circulate in Iceland in the 1840s. Recipes for Wienertærte and other Danish favourites arrived in Iceland in several cookbooks produced by a growing number of female Danish cookbook authors, including Clara Margrethe Fristrup, Christine Rostrup, and Mathilde Roedsted Schmidt.

But how did Vienna torte get to Copenhagen? The appearance of Viennese baking in the kitchens of Copenhagen reflected the uniqueness and growing popularity of new and distinctive Austrian confections in late eighteenth- and early nineteenth-century Europe. Coffee served with fashionable confections was a sign of status in Copenhagen social circles at a time when the production and baking of Viennese sweets were experiencing growing popularity in Europe. The almond flavouring in vínarterta reflected these roots. Viennese confectioners and shop owners often used ground almonds as a filler because pressure from local bakers’ guilds prevented them from legally preparing foods using wheat flour until 1748. The lifting of this restriction ushered in a new era of baking innovation in Vienna, one that blended traditions from areas around the Austro-Hungarian Empire. A range of layered cakes and tortes, many of which retained the use of ground almonds and fruit preserves, became particularly popular and spread across continental Europe.

In 1795, a Danish translation of Lovise Beate Augustine Friedel’s cookbook, Nye og fuldstændige confecture, offered interested bakers in Denmark a range of fashionable and innovative recipes for delicacies like Wienertærte, or Vienna Torte. Such instances of international culinary exchange were not unusual, and Austrian recipes, in particular, left a major imprint on Danish baking traditions. Wienerbrød (Viennese bread), for example, reportedly came to be known in English as “the danish” because of its popularity among Danish American immigrant bakers. But by the time Wienerbrød was adorning the bakery shelves and tables of the fashionable set in Copenhagen, many Danes – and potentially the subjects of the Danish Empire – had already been enjoying Wienertærte for half a century.

Wienertærte was more than a simple dessert – it was a status symbol that showcased the wealth and creativity of image-conscious Danish households. In keeping with the longer confectionery tradition in Vienna, this recipe instructed bakers how to create a layered torte using fine, preserved fruit fillings and dough made from a blend of flour and ground almonds. Unlike later Icelandic incarnations, this and other early recipes for Wienertærte encouraged variety and experimentation, showcasing status through access to a range of expensive ingredients. For example, Friedel’s 1795 recipe recommended using different fruits between each layer, including cherry, apple, raspberry, and currant. She also instructed women to make an elaborate topping for the torte by frosting it with icing made with orange blossom water and creating a floral image on top using “flowers from black cherries, preserved rose hips, and green plums.” Clara Margrethe Fristrup’s 1840 recipe reveals that Danish women were maintaining this use of multiple fillings almost half a century later because it recommended that they choose four varieties of whatever fruit preserves they preferred. Both women also invited bakers to create innovative shapes for the finished torte by making each layer of dough smaller than the first.

Click here to find out more about The Viking Immigrants: Icelandic North Americans.

Anna Maria Del Col is the Marketing Manager, Humanities at University of Toronto Press. Her background is in higher education publishing, so reading textbooks on the weekend is not entirely unusual for her, especially in the age of isolation reading. In addition to supporting humanities and trade publishing at UTP, she has a vested interest in various digital marketing projects at the press.