The Decameron, now nearly seven hundred years old, has seen something of a resurgence in recent years that testifies to the enduring power of Boccaccio’s masterpiece to speak to new audiences and to find compelling relevance even at a great distance from its immediate medieval context. In this post, Michael Sherberg, editor of The Decameron Fourth Day in Perspective, offers his perspectives on one of the greatest works of Italian literature.

I have spent a good part of my life thinking about the Decameron. It came to me when I was nineteen, and even as I kept it at bay it beckoned me. I am reminded of Boccaccio’s wonderful story of Landolfo Rufolo, who finds himself adrift in the Mediterranean after a shipwreck. An ordinary box keeps swimming toward him – that’s Boccaccio’s language, not mine – and Landolfo, who at first fears it will ram into him and hurt him, finally grabs onto it and floats to safety, only to discover later that it is filled with jewels. That is my experience of the Decameron. It foists itself upon you, hiding its jewels under the plainest of covers.

The Fourth Day, for which I edited this volume for the Lectura Boccaccii series, is a day like none other, not least because it engenders some genteel conflict among Boccaccio’s group of ten narrators. The argument centres on whether Filostrato’s chosen theme, love stories that end badly, complies with the rules for storytelling that the group has stipulated. Some of Filostrato’s female companions object, I have argued elsewhere, because by common consent no bad news was supposed to filter in, and sad stories are a type of bad news. 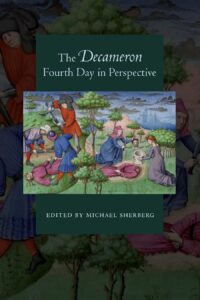 In my own head I have taken the ladies’ side, as I tend to see Filostrato as a curmudgeonly party-pooper, the Eeyore of the Decameron. Then I found myself living in the middle of a pandemic. The last nine months have caused me to rethink the wisdom of closing one’s ears to bad news. While the onslaught of statistics, heartbreaking anecdotes, smiling photographs of the dead in better days, and personal loss have tested the limits of endurance, I cannot imagine locking the door and pretending that nothing was happening outside. This is not simply a function of the fact that we have readier access to news than people did in the middle of the fourteenth century. It is instead a question of moral accountability. To be human the world requires that we participate in its grief. Boccaccio marks this imperative in the first sentence of the Decameron, and nothing exonerates us from following it.

So I find myself rethinking my impatience with Filostrato. Now I wonder if he hasn’t done his friends a favour by reminding them that, despite their enclosure in the countryside, they still inhabit the world. The space of the Decameron, and of Day Four, is liminal, its removal allowing for all manner of experimentation – social, literary, ethical – that the city could not accommodate in its diseased state. Liminality, however, is temporary, and as long as we are alive we will return from its exceptional confines to the quotidian. We would be wise to remember what awaits us as we step back over the threshold.

Click here to find out more about The Decameron Fourth Day in Perspective.

Michael Sherberg is a former president of the American Boccaccio Association, and erstwhile chair of the Department of Romance Languages and Literatures at Washington University.

Adaptation, Enchantment, and Solidarity in a "Winter" City - An Excerpt from Seasonal Sociology
The Hill Times' List of 100 Best Books in 2020: "Canadian Political Economy"