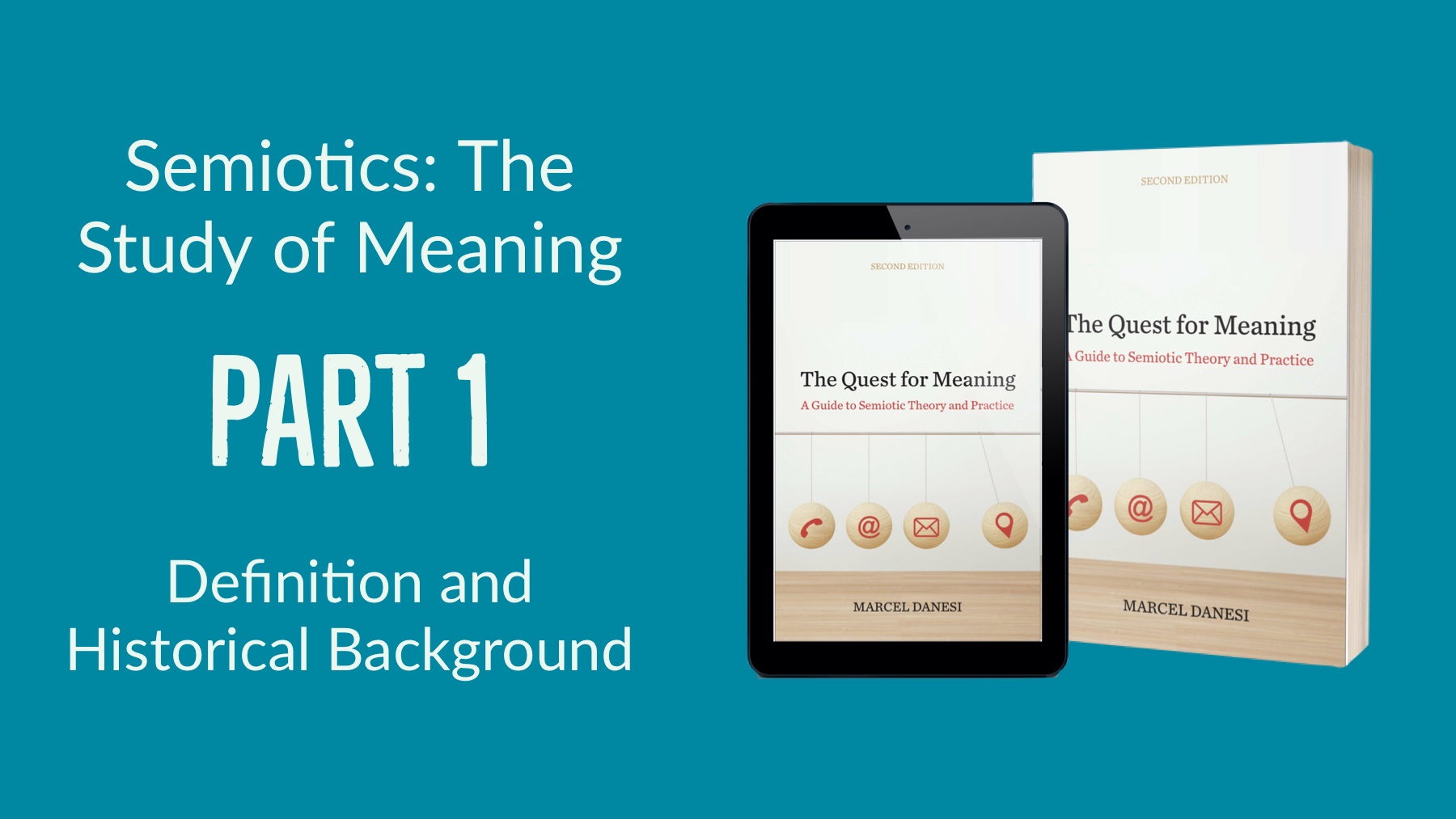 Over the coming weeks, we’ll be featuring a new three-part blog series called “Semiotics: The Study of Meaning” from Marcel Danesi, author of The Quest for Meaning: A Guide to Semiotic Theory and Practice, Second Edition. Since the initial publication of the first edition back in 2007, the world has changed dramatically with the advent of online culture, new technologies, and new ways of making signs and symbols. In this series, Danesi will explore what semiotics is all about, why it is so important for gaining insights into our elusive and mysterious human nature, and how semiotics is applied today. 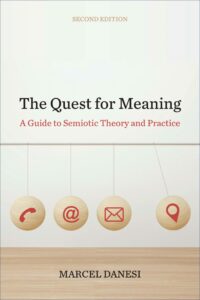 In 1984, I was asked by the Principal of Victoria College at the University of Toronto to teach the introductory course in semiotics offered by its Program in Semiotics. As a linguist, I certainly knew what semiotics was about. But I had no pedagogical idea at the time as to how I would conduct the course. Nonetheless, I accepted the challenge and instantly developed a passion for the discipline. In the mid-1980s, there were very few textbooks in semiotics designed for an undergraduate audience, and those that existed were written in a technical style. I decided then that a “user-friendly” textbook was required. After using handouts for two decades, I finally decided by the mid-1990s to write my own textbook – a decision that led to The Quest for Meaning: A Guide to Semiotic Theory and Practice, which came out in 2007. To my surprise, the book caught the attention of the general public, not just instructors of semiotics. This led to a second edition, which came out in 2020, based on the feedback I received from readers, reviewers and, more importantly, my own students.

Semiotics has been defined in various ways, from a science to a doctrine (set of principles). In all definitions, the implication is that meanings are built into all human intellectual and artistic forms, from words, gestures, facial expressions, symbols, narratives, symphonies, paintings, and comic books to scientific theories and mathematical theorems. This seems to be a daunting task, encompassing virtually all the creative activities that characterize human life. What kind of discipline can possibly cover this vast terrain? The primary objective of my book was to show that this is actually a straightforward task, since all human creative products are based on the same set of meaning-making structures, called signs. At the start of the book, I use the example of the sign formed by raising the index and middle fingers of the hand in the shape of a “V,” to illustrate what a sign in semiotics is. When asked what it “means,” the answer normally given today is “victory” or “peace,” along with a few other meanings, such as “the number two” or a “greeting gesture.” This is where semiotics steps in. The meaning of the sign as standing for “two” or “victory” is based on an elemental sign-making principle called iconicity – the process of making the form of a sign resemble what it means. This explains the connection between the two fingers in the V-form and the numerical concept of “two,” or the fact that the word victory starts with a “V.” Now, this type of analysis can be extended to any sign or sign system, showing how semiosis (the making and interpreting of signs) unfolds (cumulatively) in the human species, and what it tells us about the search for meaning throughout history. Iconicity is not the only sign-making process, of course. The point is that it demonstrates in a nutshell what semioticians look for when they analyze meaning.

The term semeiotics (now spelled as semiotics) – from Greek sêmeiotikos “observant of signs” – was coined by Hippocrates, the founder of Western medicine, to designate the study of the symptoms produced by the human body. Hippocrates showed that the particular physical form that a semeion takes constitutes a vital clue for diagnosing the disease or illness it represents. With this simple concept, Hippocrates established medicine as a diagnostic “semeiotic” science – that is, as a science based on the detection, identification, description, and interpretation of bodily signs. The concept of semeion was expanded shortly thereafter to include human-made signs (such as words) that stood for psychological or emotional states, thus implicitly subdividing signs into natural (physical) and conventional (human-made).

Eventually, the question arose as to whether or not there was any connection between these two main categories of signs. Among the first to discuss a possible relationship was Saint Augustine, the early church father and philosopher. In his De doctrina christiana (397-426 CE), he defined natural signs (signa naturalia) as those that lack intentionality, which included not only bodily symptoms, but also the rustling of leaves, the colours of plants, the signals that animals emit, and so on. Conventional signs, on the other hand, are the product of human intentionality. These include not only words, but the symbols that humans invent to serve their psychological, social, and communicative needs. Finally, he considered miracles to be messages from God and, thus, sacred signs, which can only be understood on faith, although such understanding is partly based on specific interpretations of them. Interest in signs faded shortly thereafter. It was reignited in the twelfth century by the Scholastics, who asserted that signs were important forms for human understanding, because they captured truths about the world that could be examined and transmitted to subsequent generations. But within this movement there were some – later called nominalists – who argued that “truth” was a matter of subjective opinion and that signs captured, at best, only illusory and highly variable human versions of it. John Duns Scotus and William of Ockham, for instance, stressed that signs only referred to other signs, rather than to actual things – a perspective that is strikingly akin to some modern theories of the sign. Theologian Thomas Aquinas countered, however, that signs did indeed refer to real things, constituting human models of them. So, they were both invented and thus variable, but still captured truth, partially or completely.

But there was no distinct discipline of semiotics identified as such at the time. Only centuries later did John Locke revive the term semeiotics in his Essay Concerning Humane Understanding (1690). But Locke saw it as investigative instrument for philosophers, not as an autonomous discipline of sign study. This finally crystallized in the work of Swiss philologist Ferdinand de Saussure, who put such a proposal forward in his Cours de linguistique générale (1916). Saussure used the term sémiologie (semiology) to designate the new discipline, suggesting for the first time that its goal (should it ever come into being) was to understand the social function of signs. It was the American philosopher Charles S. Peirce who put the term semeiotics into wide circulation in the early twentieth century. Although his writing style is dense and his ideas not easily understood, Peirce’s theory of the sign has become a central one and a powerful model of cognition. He is the one that put forth the theory of iconicity as a fundamental sign-making impetus. He also added indexicality and symbolicity to the list of basic semiotic propensities – the former is the kind of sign that puts things in existential relation to each other, such as smoke as an index of fire, and the latter is the sign that is forged by convention, such as the meanings of flags as standing for nations. Overall, Peirce identified 66 species of signs, forming the theoretical apparatus for semiotics to this day.

In the twentieth century, several scholars came forth to extend semiotics considerably. Charles Morris subdivided semiotics into three domains: (1) the study of sign assemblages, called syntactics; (2) the study of the relations between signs and their meanings, called semantics; and (3) the study of the relations between signs and their users, called pragmatics. The Russian-born American semiotician Roman Jakobson studied various facets of sign construction, but is probably best known for his semiotic model of communication, which suggests that sign exchanges are hardly ever neutral but involve subjectivity and goal-attainment of some kind. The French semiotician Roland Barthes illustrated the power of using semiotics for decoding the hidden meanings in pop culture spectacles such as wrestling matches and Hollywood blockbuster movies. French semiotician Algirdas J. Greimas (1917–1992) developed the branch of semiotics known as narratology, which studies how human beings in different cultures invent similar kinds of narratives (myths, tales, etc.) with virtually the same stock of characters, motifs, themes, and plots. The late Hungarian-born American semiotician Thomas A. Sebeok was influential in expanding the semiotic paradigm to include the comparative study of animal signaling systems, which he termed zoosemiotics, and the study of semiosis in all living things, which has come to be called biosemiotics. The late Italian semiotician Umberto Eco contributed significantly to our understanding of how we interpret signs, claiming that the key to human semiosis, as different from semiosis in all other species, is interpretation, namely that our signs allow us to interpret the world and thus to modify it constructively – an idea that was fundamental to Peircean semiotics. Needless to say, many others contributed to the institutionalization and development of semiotics in the previous and current centuries.

Today, semiotics is branching out into the study of new media, digital technologies, artificial intelligence, web discourses, and the like. As a discipline studying the structures of meaning it is providing insights into the content of the new media and the nature of artificial meaning systems – all of which are critical to grasping the future of humanity. So, what is meaning? This will be discussed in my next blog entry.