Home > Blog > Sketches of Tourism and the Pandemic in Peru 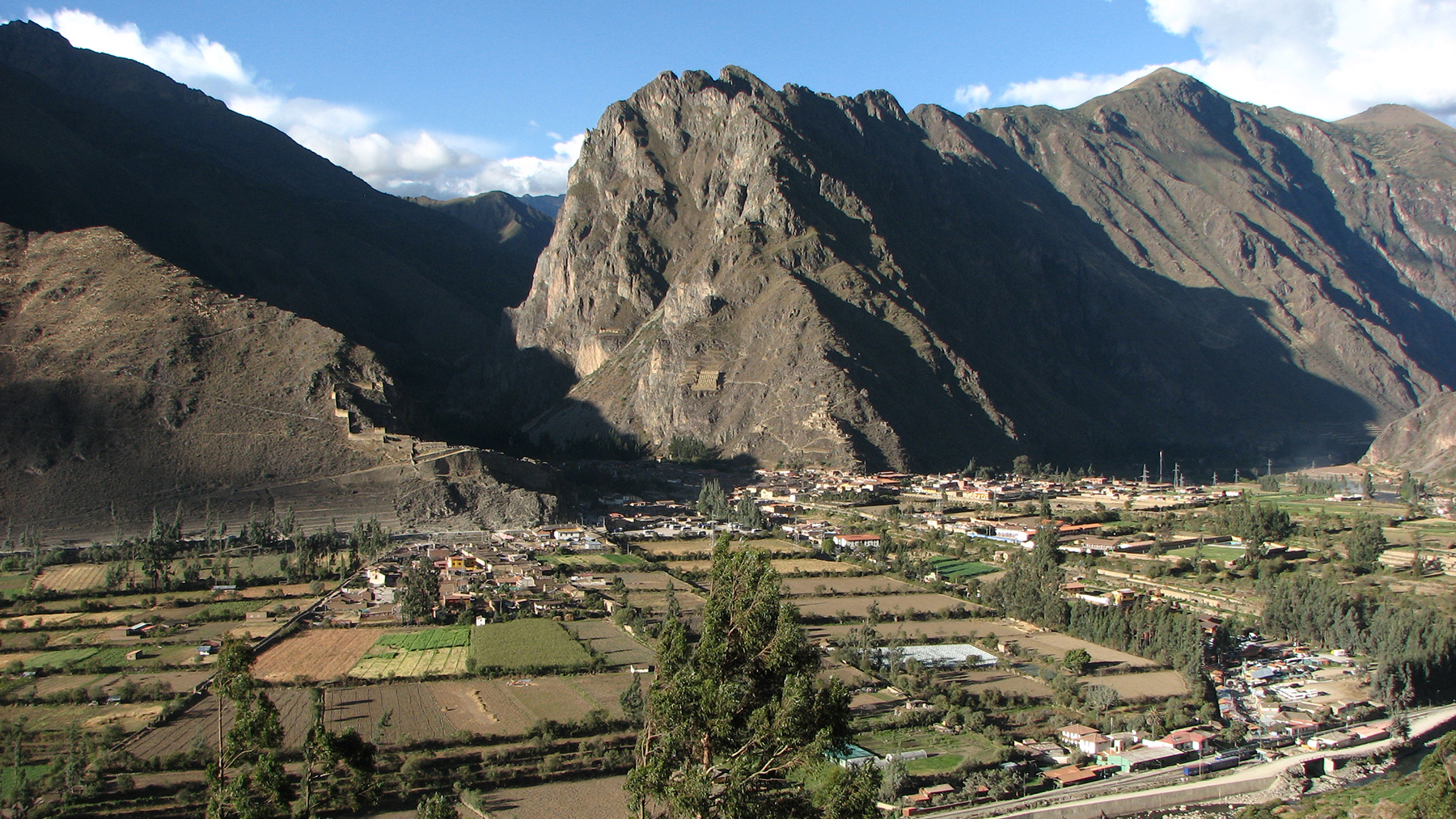 Released this month, The Living Inca Town: Tourist Encounters in the Peruvian Andes presents a rich case study of tourism in Ollantaytambo, a rapidly developing destination in the southern Peruvian Andes and the starting point for many popular treks to Machu Picchu. Part of the Teaching Culture: UTP Ethnographies for the Classroom series, the book offers a rich ethnographic study of gender and other dimensions of tourism in a world heritage site. In this post, author Karoline Guelke looks at the impact COVID-19 has had on the region.

COVID-19 has hit Peru hard. Just as my book The Living Inca Town: Tourist Encounters in the Peruvian Andes has launched, most areas in the country are again under strict lockdown and tourism remains at a stand-still. Many of the people I met during my research in the town of Ollantaytambo built their livelihood on tourism, which had been expanding rapidly over the past decade. The community is unique in that has been continually inhabited since Inca times, and many houses are built on top of the massive original stone foundations. Ollantaytambo is located about a two-hour drive from Cusco and is commonly used as a stop-over to Machu Picchu, Peru’s most visited tourist site. The photo (right) shows tourists crowding one of Ollantaytambo’s narrow alleys in the old part of town, which was a common sight during my research there in 2014 and 2015.

All this has changed now. A friend recently described Ollantaytambo’s streets as sad and deserted and told me that the large tour bus parking lot has been converted into an outdoor market that allows for social distancing. While I have been critical of many aspects of tourism development, most local people emphasized that they appreciated tourism for the income it provided. Tourism employment is frequently unstable, but the complete shut-down has brought a serious threat to many livelihoods. During my stay, Manuel Gomez (pictured right) was working as a waiter in an upscale restaurant in Ollantaytambo. Years earlier he had studied in Germany, and, in addition to Spanish, he could converse in German, English, and some French. When the pandemic forced businesses to close, Manuel lost his work and was forced to take on a number of menial jobs. For a while he was selling chocolates in the streets of Cusco, as shown in the picture he sent me, and he is currently working at a cement factory in Peru’s jungle region. He writes that his hands and back hurt but he is getting used to it.

Another person I came to know well is María, a middle-aged mother of two who ran a guest house where I stayed for part of my research. I recall the impressive Inca walls and beautiful courtyard filled with potted plants that María tended lovingly. Her husband was working as a driver for a tour company, but without tourism both of them are out of work. Like many other Peruvians in the same situation, they turned to planting crops. “We are peasants now,” María wrote to me. “We are clearing land to plant potatoes.” She sent me a couple of photos showing family members removing thick grass and rocks on what looked like a very steep slope above the valley.

Since the start of the pandemic, Peru has seen a massive return migration from the cities back to the country. In April and May last year, when public transport was largely shut down, thousands of migrant workers were stranded in Lima and other cities; news reports showed them waiting at bus stops, holding signs saying: “Help us get home.” Many were walking for days or weeks to reach their home communities where agricultural labour offered a means to survive. Many rural municipalities like Ollantaytambo started offering training workshops in basic agricultural skills. For a while, my Peruvian friends posted memes on social media that poked fun at returnees and reflected the tensions between the urban and rural population. A typical example showed a woman in high heels, mini skirt, and heavy make-up standing next to an Andean farmer, captioned: “Oh look, after not speaking to me for years, my cousin is back from the city to work in the fields.” These days, as the situation has continued to worsen and Peru is dealing with some of the highest infection rates worldwide, I do not see many jokes posted anymore.

Before the pandemic brought such hardship, the rapid tourism development in the Cusco area had already contributed to a growth of inequalities, as I explore in The Living Inca Town. The graffiti (pictured right) appeared on a wall in one of Cusco’s busy tourist districts. The message appears to be contested by being crossed out and subsequently rewritten, reflecting the highly uneven distribution of costs and benefits associated with tourism.

My research investigated ways in which tourism perpetuates structural gendered and global inequalities, but also showed that tourism provides distinct avenues through which people can challenge and renegotiate these inequalities. Currently, I am using my book for a third-year class in anthropology and tourism. Even with the limitations of asynchronous discussion forums, I am happy to find that students are engaged and quick to draw connections between theoretical concepts and their personal experiences of travel and tourism work. 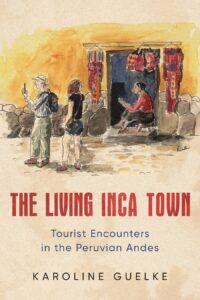 Despite being a case study focusing on a particular place and time, the book can provide an effective entry point into discussing broader topics such as globalization, power, gender roles, cultural identity, and the supernatural. The Living Inca Town also offers talking points for visual methods. First, it includes images from a photovoice project, for which local people took photos and provided commentary reflecting their own perspectives of tourism. Second, inspired by the growth in visual anthropology and publications such as UTP’s ethnoGRAPHIC series, I included my own pen and ink drawings. The process of drawing helped me to process and condense information, and the sketch-like nature of this artistic approach emphasizes the dynamic, subjective, and incomplete nature of ethnographic knowledge. The images seem to engage readers on a different level and have prompted many comments from students. Thus, the book may offer a good option for teachers seeking material to discuss visual methodology, but not necessarily a full graphic ethnography.

María sent me more photos in recent weeks showing that her crops are growing well. She writes that her son has learned to look after chickens and her family is getting by but, like Manuel, she is eager for tourism to start again. Tourism and anthropology share the dark past of colonialism and imperialism, yet both also offer ways for people to gain a deeper understanding of each other. There have been many calls for restarting tourism in more sustainable and responsible ways. Last summer UN Secretary-General António Guterres optimistically stated that “tourism can be a platform for overcoming the pandemic. By bringing people together, tourism can promote solidarity and trust.” One of the tourists I interviewed in 2015, a Swiss backpacker in her 30s, had spoken about her efforts to travel more slowly, to learn from people, and to appreciate the little things on her journeys. I hope that my book will encourage students to reflect on their own roles in gaining deeper understanding and forming connections, in the context of tourism and beyond.

Interested in finding out more about the second edition of The Living Inca Town: Tourist Encounters in the Peruvian Andes. Click here to read an excerpt from the book.

To request exam or desk copies of The Living Inca Town or any other UTP title, please email requests@utorontopress.com and be sure to include the course name and number, start date, and estimated enrollment.

Karoline Guelke is an assistant teaching professor in the Department of Anthropology at the University of Victoria.

Researching "The Typewriter Century"
Semiotics: The Study of Meaning (Part 2)