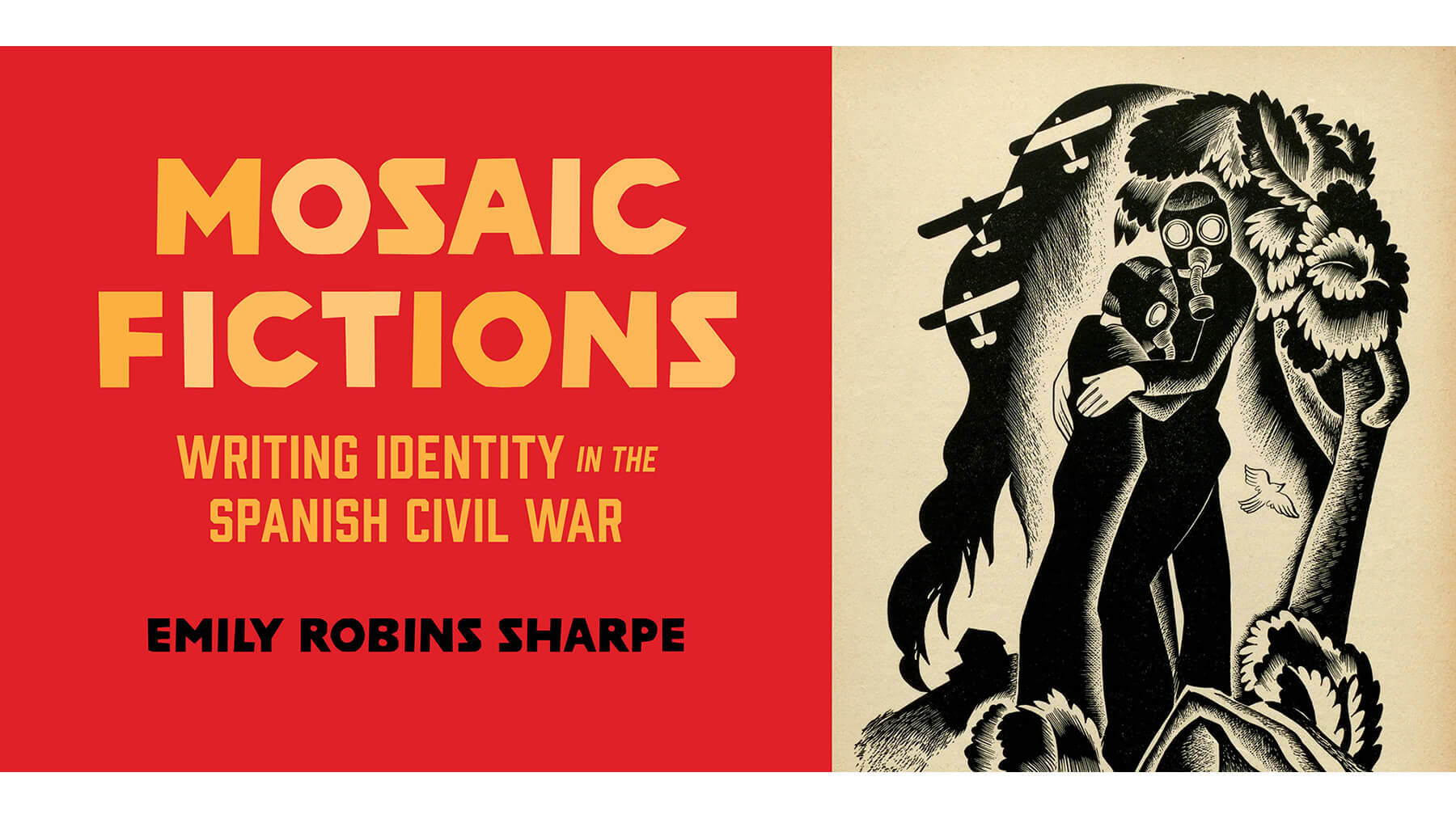 We invited Emily Robins Sharpe, author of Mosaic Fictions: Writing Identity in the Spanish Civil War, to discuss her book which examines Canadian Spanish Civil War literature and reveals texts composed between the war’s outbreak and the present to illuminate the integral connections between Canada’s developing national identity and global leftist action.

My book Mosaic Fictions: Writing Identity in the Spanish Civil War focuses on how overlapping North American networks of Jewish, Black, immigrant, women, and queer writers represented the Spanish Civil War of 1936–1939. The Spanish Civil War was only nominally a civil war, as supporters of the newly democratic country fought back against an attempted international fascist coup. In their fiction, poetry, and memoir, the authors I study were concerned with the transnational repercussions of the Spanish Civil War, but they were also aware of its local, often personal, impact.

During the 1930s and ’40s, where my study begins, the stakes of legal and social inclusion within Canada were exceedingly high. In the Great Depression’s wake, in the midst of oppressive European and North American fascism, antisemitism, anti-Black racism, xenophobia, and sexism – to name just some of the dangers facing these authors and their communities – national inclusion promised personal security. As a result, many of their literary depictions of Canadian participation in Spain’s war cast this transnational action as inherently patriotic. In other words, Canadian patriotism was demonstrated through ethical international action, not a particular ancestry. I argue that Canadian writers often wrote about Spain as a way of thinking through what it means to be Canadian – frequently, with explicit discussions of how immigration status, gender, sexuality, race, and religion shape Canadian patriotism. Mosaic Fictions examines literature spanning the midst of the war to the present time, demonstrating the ongoing reverberations of the Spanish cause in Canada and the continued significance of these early attempts to write marginalized communities into a new definition of Canadian patriotism.

In addition to the 1,700 Canadian volunteers who illegally travelled to Spain to fight fascism (illegal because the Canadian Foreign Enlistment Act prohibited fighting in foreign armies during wartime), Canadians back home raised funds and awareness for the Spanish cause. Artists and writers depicted the Spanish Civil War on a massive scale – it’s one of the most extensively documented events in Canadian history (the Canada and the Spanish Civil War Project’s bibliography of Canadian cultural production around Spain totals 390 pages).

While my book focuses on literature, my approach and argument draw too from Canadian Spanish Civil War art and from visual depictions of Canadian communities. There were many photographs of Spain’s carnage available: it was the first war to be documented by handheld cameras. The death of Jewish German photojournalist Gerda Taro in the aftermath of a bombing even forms a key part of the plot of Jewish Montreal author and volunteer Ted Allan’s Spanish Civil War novel This Time a Better Earth (1939). Artists like Paraskeva Clark and Laurence Hyde also created beautiful, disturbing images that brought Spain’s cause home to Canada. The cover image for Mosaic Fictions is just one example. The British-born Hyde is perhaps best known for designing many of Canada Post’s stamps, and for his animation work with the National Film Board. As a young man, Hyde also did some illustrations for magazines, including this image, entitled “Lovers Sheltering from a Storm” (1936). It was published in the leftist little magazine New Frontier in January 1937, appearing amidst articles about the Spanish Civil War. I am fascinated by the striking graphic and its contrast to the title’s ironic invocation of a romantic vision (although I could not have predicted when we selected this image for the cover that the gas masks would resonate with our current reliance on face masks). These lovers are clearly under attack – not from stormy weather, but from the planes overhead. They are not obviously gendered or racialized – their gas masks obscure their faces, although their skin tone skews white. In the background, we see a home on fire, suggesting that they are homeless, deracinated – where will they go now? But there’s a dove that flies by them, too, a religiously coded promise of peace.

I included other images in Mosaic Fictions, too. An illustration by Henri Sevilla (left) from New Frontier (December 1936), of a crucified soldier, was then incorporated into Canadian author Dorothy Livesay’s 1977 memoir Right Hand Left Hand. In its publication in New Frontier’s special issue on Spain, Sevilla’s image illustrates the correspondence section. In Right Hand Left Hand, it falls in the midst of Livesay’s poem “Lorca,” about the queer Spanish poet-playwright Federico García Lorca, murdered by Franco’s forces. Franco’s fascism received extensive support from the Catholic Church, and so this imagery represents an intriguing reversal – in this new context, the crucified soldier further suggests Spain’s sacrifice of García Lorca. While the illustration does not depict the writer – who never fought – it underscores his martyrdom.

Mosaic Fictions also includes a series of images from John Murray Gibbon’s 1938 study of Canadian immigrants, Canadian Mosaic: The Making of a Northern Nation. Every chapter of Canadian Mosaic corresponds to a different predominantly white nation except for the transnational chapter on “Hebrews.” This chapter and its illustrations and photographs are focused on mostly Ashkenazi Jewish immigrants. Gibbon suggested the possibility of Jewish immigrants’ partial assimilation into white British-Canadian society while also clearly distinguishing so-called “Hebrews” from other denizens of the countries from which they came. 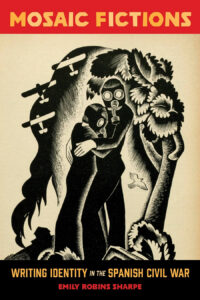 The images of Jewish people may have been intended to emphasize the longstanding history of Jewish contributions to Canada, but they also highlight the book’s patronizing, infantilizing perspective – the only adult Jews pictured are from early in Canadian history; the rest are children, or else pictured through illustrations. Canadian Mosaic at once encourages sympathy towards Jewish immigrants and demands their assimilation.

Gibbon was one of the first to use the now outmoded metaphor of the mosaic to describe multicultural Canada, a country composed of peacefully coexisting, distinct yet connected cultures. My own book’s title invokes the term, instead, to suggest how this metaphor was both used and subverted by Mosaic – that is, Jewish – writers in their own writings about Spain, a country whose own mosaic decorations recall its pre-Inquisition Muslim heritage. These artistic works – mosaics, photographs, illustrations, poems, novels, memoirs – all have something to tell us about how we imagine our nation, ourselves, and others.

Click here to find out more about Mosaic Fictions: Writing Identity in the Spanish Civil War or watch the video below to see Emily Robins Sharpe introduce her book.

Emily Robins Sharpe is chair and associate professor in the Department of English at Keene State College, where she is also an affiliate faculty member of the Departments of Women’s and Gender Studies, and Holocaust and Genocide Studies.

The Urgent Need to Address Physical Inactivity
Semiotics: The Study of Meaning (Part 3)