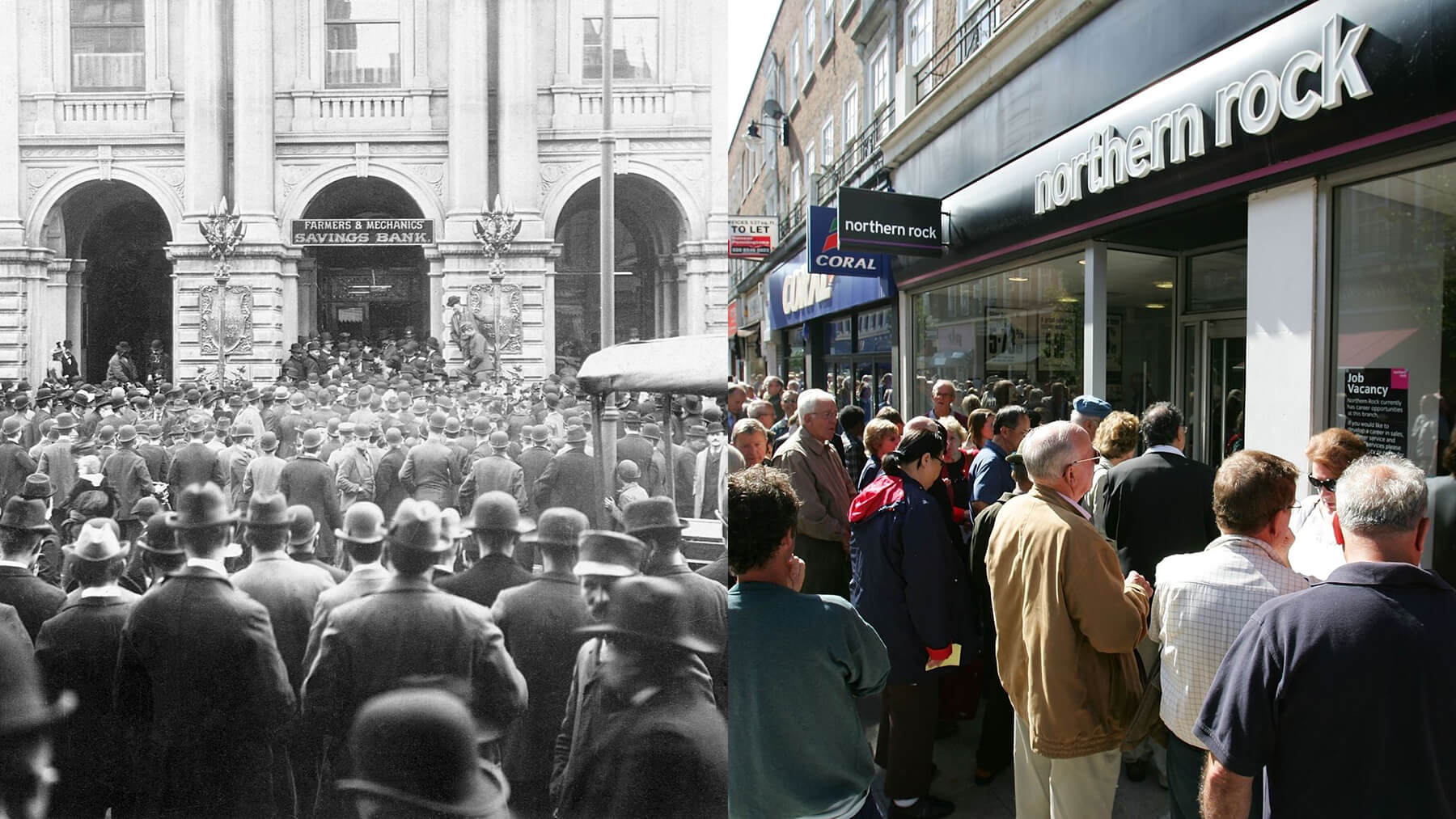 Providing insights into the evolution of the global political economy, From Malaise to Meltdown: The International Origins of Financial Folly, 1844– identifies the main instigators behind the global financial crises we’ve seen in the last two hundred years. In this post, author Michael Lee details some of these cases and looks at what lessons we can learn from them. 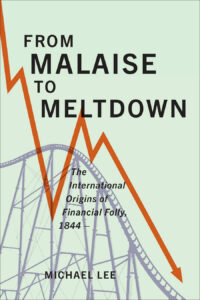 As a child in the 1990s, I remember being fascinated by the stock market: it held at once the allure of great riches, the promise of future technological transformation, and the fun of gambling without social opprobrium. However, I also encountered more cautious views. For instance, my grandfather, who had lived through the Great Depression, was suspicious of the growing euphoria and certain that another crash lay just around the corner. Although my grandfather passed away in 1998, his dismal view of the market would soon be vindicated. Years later as a graduate student I used to travel from Bloomington, Indiana to Toronto by Greyhound bus during the holidays. In cities like Youngstown, Detroit, or Erie, the impact of the crisis of 2008 was palpable – shuttered factories and abandoned homes filled the landscape of the industrial Midwest. It was easy to tell what I should study in graduate school.

In a few short years we have seen Japan’s lost decade(s), the 1997 East Asian Crisis, the Dot Com crash, the Argentine Depression of the early 2000s, the 2008 financial crisis, and the subsequent Eurozone Crisis to mention only the most high-profile cases. As of this writing, we are in the middle of another moment of crisis (the COVID-19 pandemic) that saw unemployment rates hit levels unseen since the Great Depression. Yet, if we look at the longer span of history, there have been periods where financial crises were relatively rare (e.g. 1945 to the 1970s), and other periods where crises were common (e.g. 1873–1896 and 1929–1939).

While there are many great works to explain this or that financial crisis, fewer examine why crises cluster in the times that they do. I owe a great deal to the ideas of George Modelski and William Thompson, who see history as cyclical – particular states capitalize on new economic opportunities, and use newfound wealth to develop military capabilities and exercise forms of global political leadership. In time, however, their economic edge of the leader tends to diffuse, prompting struggles (often wars) over who shall lead the system. As I set out to understand financial crises, I wanted to understand how national striving for global leadership encourages states to take undue risks in the ways they regulate their financial systems. From Malaise to Meltdown: The International Origins of Financial Folly, 1844– is the product of that exploration.

In the book, I argue that the global economy is not an egalitarian playing field, but rather that over the past few centuries there has been a singular state able to benefit from its position as the lead economy. For instance, today the United States dollar is the global reserve currency – universally sought as a store of value. American financial firms earn substantial excess returns over others in part because they have privileged access to deposits of the world’s money. The New York Stock Exchange is by far the biggest market in the world. The United States also occupies a powerful role inside many of the international institutions that shape global development policy and our responses to crises (no doubt, American power is amplified by the cooperation of a larger club of other states, e.g. the G-7, but the United States is an indispensable member of that club). Finally, should other states come into conflict with the United States, they run the risk of damaging financial sanctions. To quote Mel Brooks, “it is good to be the king.”

At various points in history, global financial leadership has been contested, with regulatory reform an important means by which countries compete. Lead economies fearing the loss of their advantages, and rising challengers seeking to obtain them, may both opt for less stringent regulations in moments where global leadership is up for grabs. While less stringent regulation enables financial innovation and is more attractive to global capital markets, it also often opens the door to greater risk-taking by financial firms. With many of the most prominent states adopting risky policies (and often enjoying seeming success… at first), less stringent regulatory forms spread, while proponents of the old safeguards are cast as dinosaurs. Reform, too, can expand with a sort of snowball effect as newly deregulated sectors grow in size and influence and as risk-acceptant theories appear vindicated by momentary prosperity. It is at these moments that the seeds of the worst waves of crises tend to be sewn.

In the book, I look at the period from 1844 to the present and find three periods of intense regulatory competition. First, there was an intense rivalry between Britain and the French Second Empire during the 1850s and 1860s that saw each experiment with new corporate structures. In France, the creation of the Crédit Mobilier, a massive limited liability investment bank, sparked a major boom financing the infrastructure of a “Mediterranean system” centred on Paris. In Britain, the success of the Crédit Mobilier helped overcome longstanding objections to limited liability corporations, which were liberalized considerably. In both countries, financial reforms sparked a boom, leading to widespread imitation of similar forms. However, these new corporate forms also proved more risky, resulting in numerous crashes (e.g. the crash of the Crédit-Mobilier, the Overend-Gurney crash of 1866, the City of Glasgow crash) and ultimately a protracted period of economic misery known as the Long Depression of 1873–1896.

While British financial leadership survived Anglo-French contestation in the nineteenth century, the First World War broke Britain’s near-monopoly of key global financial markets and caused the collapse of the gold standard. As the United States, Britain, and France tried to reestablish the gold standard, each pursued the goal of national primacy to the exclusion of financial stability. The United States adopted easy money policies, hoping to encourage others to return to gold – its newfound influence in global finance would mean little if the world remained hunkered behind barriers. Britain insisted on returning to gold at its prewar parity of $4.86, believing that the force of tradition would return London to its former place at the centre of global finance. France, in turn, returned to the Franc at a relatively low level in an effort to soak up the world’s gold. Britain’s continuing insecurity required yet looser monetary policies by the United States, sparking a legendary bubble on Wall Street. Even as the bubble burst and the global economy collapsed in 1929, the United States was constrained by the gold standard and unable to enact the kind of monetary expansions we saw from the Federal Reserve in 2008 and 2020. The result was the Great Depression of 1929–1939.

The pain of the Depression saw the emergence of new regulatory safeguards around the world – from capital controls to new regulatory agencies. In the United States, commercial and investment banks were separated by the Glass-Steagall Act, while securities markets were watched over by the lawyerly Securities and Exchanges Commission. While the new era of “embedded liberalism” brought three decades of prosperity amidst security to the United States, Western Europe, and Japan, economic shifts would eventually pose threats to the now American-led system. By the 1980s, the rapid growth of the Japanese economy, coupled with efforts at financial liberalization posed a challenge to American financial leadership – the Tokyo Stock Exchange even briefly passed New York in stock market capitalization. Simultaneously, aggressive liberalization in Britain posed London as yet another competitor with American leadership. Gradually, these competitive threats disrupted the longstanding opposition to deregulation (e.g. many segments of the financial sector actually opposed the abolition of Glass-Steagall in order to protect their “turf” from competition). The Great Deregulation of the 1980s and 1990s culminated with the liberalization of new derivatives markets which would allow financial firms to make immense bets that not only risked their own solvency but the stability of the economy itself. A relatively mild shock (modest declines in housing prices) proved sufficient to trigger a far larger crash in 2008.

We appear to be caught in a tragic cycle of decline, competition, crisis, and reconstitution. Although I do not have a solution, recognizing the pattern and where we are in it is useful. The crash of 2020 was a truly terrible event, but there are ways in which it speaks to both the resilience of our institutions and their limitations. The material shock of the COVID-19 pandemic was far worse than the subprime mortgage collapse – millions of people died and most of the world went into lockdown. Yet our financial systems have mostly remained intact – central banks poured on the liquidity in order to avoid a credit freeze, governments spent money to help people through tough times, and financial firms (following years of adherence to new regulations like Dodd-Frank) entered the crisis in better shape than in 2008. However, we also saw what might be portents of difficulties to come. American fear over the rise of China has coloured the distinct lack of global cooperation. For instance, the United States withdrew from the World Health Organization amidst the worst pandemic in a century. The debates about tradeoffs between public health and economic growth, too, hit similar themes to those explored in From Malaise to Meltdown. If history is any guide, the voices calling for us to take more risks in pursuit of imagined prosperity are likely to grow louder in a world where American leadership is increasingly in question. I submit that we might wish to look at where such thinking has led us in the past.

Click here to find out more about From Malaise to Meltdown.

Michael Lee is an associate professor in the Department of Political Science at Hunter College and author of From Malaise to Meltdown.

Cold War Misogyny: Fear of Momism on Both Sides of the Iron Curtain
The Urgent Need to Address Physical Inactivity