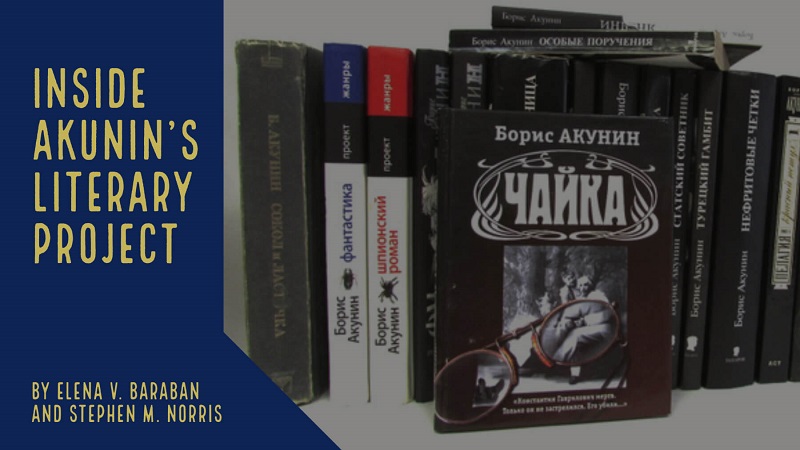 The Akunin Project is the first book to study the fiction and popular history of Grigorii Chkhartishvili, one of the most successful writers in post-Soviet Russia. Chkhartishvili published over sixty books under pen names including Boris Akunin, one of the most popular and prolific Russian writers of the twenty-first century. In this post, editors Elena V. Baraban and Stephen M. Norris talk about their book and offer us a glimpse into the mysterious persona of Russia’s Bestselling Author.

Anton Chekhov’s The Seagull [Chaika] is the play that launched the writer’s career as a dramatist. Written in 1895 and first performed in 1896, it flopped at first, in part because Chekhov wanted it acted as a comedy. When Konstantin Stanislavsky restaged it as a drama, it clicked, becoming the first of the four plays that came to define modern drama.

The plot features love triangles, messy relations between social classes in an increasingly diverse Russian Empire, a play-within-a-play that comments on modern art, and a dead seagull (which is really just a gull given that the action takes place far inland). The play’s major characters include a famous belletrist writer, Boris Trigorin, an older actress, Irina Arkadina, a young daughter of a rich landowner, Nina, and Irina’s son, Konstantin, a wannabe symbolist playwright and killer of the titular gull. Konstantin attempts suicide in the third act; the play ends with a shot offstage and his apparent death.

But what if he did not commit suicide? What if Konstantin was murdered, his moody ways and suicidal thoughts providing a perfect cover for the perfect murder? Chekhov’s famous use of offstage action could indeed make you wonder, particularly if you are Boris Akunin.

In 1998, an unknown author using a pseudonym published four mysteries starring a tsarist secret policeman named Erast Fandorin. “B. Akunin,” the author, became a bestselling phenomenon the following year. His mysteries were playful, smart, and fun, an antidote to the gloom that pervaded most post-Soviet culture. The author’s name even captured the cleverness within his initial books, conjuring as it did associations with the anarchist Mikhail Bakunin. Moreover, when “B. Akunin” turned out to be Grigorii Chkhartishvili, the respected editor of a literary journal and expert on Japan, others noted that the Japanese word “Akunin” means “villain.” Akunin/Chkhartishvili became a phenomenon, his middlebrow mysteries the source of intense debates.

In his initial interviews, Akunin, who added “Boris” to the pseudonym, commented that he did not want to be seen as a “writer [pisatel’],” for that word came loaded with expectations: he did not want to be a Tolstoy, a Dostoevsky, a writer who tackled the accursed questions of Russian history and identity. Although he referenced the great Russian writers of the past in his writings – Erast Fandorin took his first name from the villain in Nikolai Karamzin’s 1792 sentimentalist story “Poor Liza” – Akunin did not want to emulate them. Instead, Akunin often stated, he was a belletrist. He wanted, in other words, to be more like Trigorin in The Seagull.

So it made sense that Akunin, at the moment he became famous, would turn to Chekhov’s first famous play. In 2000, Akunin debuted his Seagull, a play in two acts that begins at the very moment Chekhov’s ended. Dr. Dorn, who treated Konstantin in Chekhov’s play, announces his name is Van Dorn, thus making it sound like Fandorin. It seems all of Chekhov’s characters had a reason to dislike Konstantin and had the time to kill him. Akunin’s second act has the good doctor playing detective, interrogating everyone one by one, with twists and turns guaranteed to make everyone second guess their initial thought about the real culprit. The end has one final, surprising twist. Akunin’s two additional acts read like Chekhov’s original, making the reader (or viewer, if you saw it performed) think they are just reading a lost manuscript.

I won’t reveal the ending of Akunin’s play. I will say that if this overview is of interest and you do not already know about Boris Akunin, you have just discovered the tip of a very large iceberg. Since he emerged on the cultural scene in 1998, the proclaimed belletrist has published just over fifty works under the name Boris Akunin, three under the name Anatolii Brusnikin, three under the name Anna Borisova, four under the hyphenated Akunin-Charkhtishvili, and two under his actual name, Grigorii Chkhartishvili. He has consistently topped bestseller lists. This remarkable output is in part a carefully planned project, one mostly conceived in the late 1990s by Chkhartishvili. After the 2011 political protests, the writer became an outspoken critic of Vladimir Putin and eventually emigrated.

Our volume, The Akunin Project: The Mysteries and Histories of Russia’s Bestselling Author, is the first-ever book devoted to the Akunin phenomenon. It contains twelve essays by scholars, two interviews with Akunin conducted by each of the two co-editors, and four translations that had not yet appeared in English.

Here’s a concluding admission, offered perhaps as an Akunin-like twist: The Akunin Project does not analyze his version of Chekhov’s Seagull. For the surprise ending, you’ll have to read it yourself (fortunately it appeared in English translated by Michael Katz in The New England Review). Before you do that – or even after – you’ll want to read The Akunin Project.

Find out more about The Akunin Project: The Mysteries and Histories of Russia’s Bestselling Author.

Elena V. Baraban is an associate professor in the Department of German and Slavic Studies at the University of Manitoba. Stephen M. Norris is the Walter E. Havighurst professor of Russian History and the Director of the Havighurst Center for Russian and Post-Soviet Studies at Miami University in Ohio.