Home > Blog > Cold War Misogyny: Fear of Momism on Both Sides of the Iron Curtain 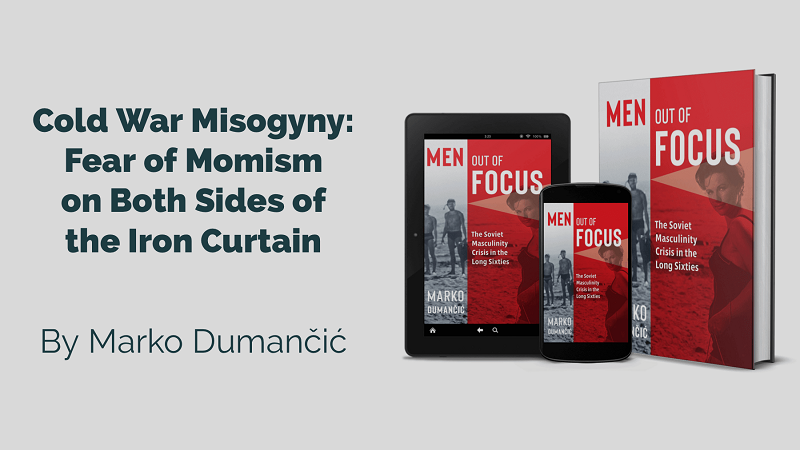 Selling over three billion tickets annually, the Soviet film industry became a fault line of postwar cultural contestation where filmmakers built stories around male protagonists who felt disoriented by a world that was becoming increasingly suburbanized, rebellious, consumerist, household-oriented, and scientifically complex. In this post, Marko Dumančić discusses his new book, Men Out of Focus: The Soviet Masculinity Crisis in the Long Sixties, and examines some of the period’s most controversial movies.

Winston Churchill’s term Iron Curtain was meant to imply a sense of imperviousness. The impenetrable border suggested a limited circulation of both people and ideas. While it is clear that exchanges of individuals and viewpoints were circumscribed, my book Men Out of Focus examines a number of shared cultural tropes that circulated in both ideological camps. One of the most striking examples of a common East-West phenomenon was that of “momism.” Starting with the 1940s in the US and 1950s in the USSR, the visual culture of the two superpowers portrayed middle- and upper-class moms as an existential threat to male autonomy, the stability of the social equilibrium, and national defense.

American and Soviet artists portrayed middle-class (sub)urban women as engaging in a two-front war: they emasculated their spouses by browbeating them while emasculating their sons by mommying them. The widely circulated Soviet satirical magazine Krokodil presented momism as both a gateway and key cause to problems plaguing the postwar generation of men. For instance, in a 1967 cartoon, a wife literally roughs up her husband, demanding that he explain the concept of matriarchy to his son, whom she is protectively embracing (Figure 1). The physically and psychologically dominant female is cast as a harpy who is as bent on dominating her husband as she is on mollycoddling her son. Momism in the Soviet context had a distinct class overtone as privileged moms went to humorous lengths to spare their sons the indignities of manual labor. In order to protect their male offspring from the vagaries of the real world, Soviet matrons fought battles against male authority figures – husbands, university deans, foremen, and police officers – and most often won the battle. A 1958 cartoon shows a gaggle of middle-aged matrons roughing up a university dean to ensure that their sons secure a spot in the entering class. It is evident that the dean is outnumbered, outgunned, and outflanked; he must submit. The ultimate result of these efforts was arrested development, i.e. men who remained boys and who directly depended on their mothers. (Figure 2)

The Soviet critique of overbearing maternalism resembled the US “momism panic” which emerged after Philip Wylie’s bestseller Generation of Vipers was published in 1942. The litany of sins Wylie ascribes to American stay-at-home matriarchs bears a striking resemblance to fears the Soviet public expressed. Wylie rails against the power and status of American women as he confidently pronounces: “The male is an attachment to the female in our civilization. […] He does most of what he does – eighty percent, statistically – to supply whatever women have defined as their necessities, comforts, and luxuries.” More than a fringe eccentric, Wylie’s critique of “pathological mother love” represented an extreme articulation of arguments advanced by psychoanalysts, psychiatrists, and other psychological experts during the 1940s and 1950s. Edward A. Strecker’s 1946 book Their Mother’s Sons: The Psychiatrist Examines an American Problem presents momism as the cause for a range of phenomena, including psychoneurosis, schizophrenia, religious fanaticism, alcoholism, homosexuality, and even Nazi Germany and Imperial Japan.

Wylie’s and Stecker’s ideas readily translated into popular culture and perhaps most notably in James Dean’s performance in the 1955 cult-classic Rebel Without a Cause. Dean plays the young Jim Stark, who, as a seventeen-year-old, is on the cusp of transitioning into adulthood, and defines himself in opposition to his domineering mother and submissive father. Early in the film, Jim looks at his father Frank and tells the juvenile officer: “If he had guts to knock Mom cold once, then maybe she’d be happy, and she’d stop picking on him.” He frequently complains that his mother and grandmother “make mush” of his father. Although Carol Stark and Mr. Stark’s mother do not receive significant on-screen time, the ill-effects of their momism appear self-evident. Even without being physically present, Mrs. Stark rules the coop, proving Jim’s diagnosis that “She eats him alive, and he takes it.” The accuracy of Jim’s observation is most evident in a scene where Jim comes home to see Frank on his knees cleaning up a fallen tray of food he had prepared for his wife as she lounges in bed, nursing a headache. To manifest Frank’s complete transgression of normative gender roles, he wears a frilly apron over his suit, all the while fearing he might make too much noise and disturb the slumbering missus. Even when Jim implores and demands that Frank stand up for himself literally and figuratively, the dad seems incapable of breaking the passivity he has chosen for himself. This scene is a clear echo of the Krokodil cartoons which cast mothers as household bullies who domineer their husbands. Jim rejects his father as a masculine role model and ridicules the perversion of inverted gender roles when he exclaims: “I’ll tell you one thing, I don’t ever want to be like him. How can a guy grow up in a circus like that?” Thus, the rebellion advertised in the film’s title comes down to Jim rejecting his father’s submissiveness as a precondition of achieving adult masculinity.

Iron Curtain or not, the postwar visual culture of both the US and USSR proved equally preoccupied with the perceived gender imbalance caused by outsized female influence over the country’s men. Despite being at odds with one another, the Cold War rivals channeled their anxieties about the era’s monumental changes in clearly misogynistic overtones.

Click here to find out more about Men Out of Focus: The Soviet Masculinity Crisis in the Long Sixties.

Marko Dumančić is an associate professor of Russian and East European History at Western Kentucky University.