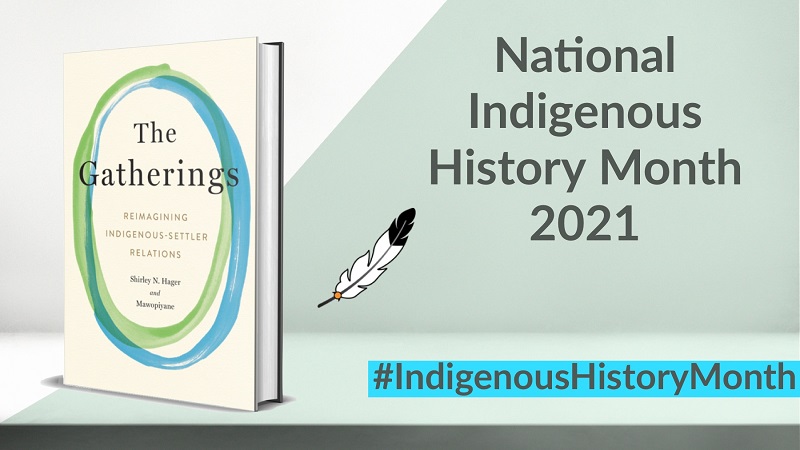 June is National Indigenous History Month, an opportunity to honour the history, heritage, and diversity of Indigenous peoples in Canada. Now more than ever, we must make time, not just in June but year-round, to read about and share the stories of Indigenous history in Canada. In this post, two authors from The Gatherings: Reimagining Indigenous-Settler Relations, Marilyn Keyes Roper and Alma H. Brooks, answer a few questions about what Indigenous History Month means to them. We’re also including the video from the April 2021 book launch.

UTP: What does “Indigenous History Month” mean to you?

Marilyn Keyes Roper: Because of the Peace and Friendship Treaties in New Brunswick, the land was never ceded by the Wabanakis. Indigenous History Month is an opportunity to spread the word about this to many settlers’ descendants who do not know about this. Hope springs eternal that Canadian government officials will do a better job of informing the general public about the rights of Indigenous Peoples in Canada. June would be an excellent time to do this including relevant Supreme Court decisions.

UTP: Do you plan to celebrate it?

MKR: Yes. A short video is being made by the Carleton County Historical Society and filmmaker Alan Edwards that features Carol Polchies and Darrell Paul of the Woodstock First Nation talking about their father, Peter Paul, and his work with Tappan Adney on the preservation of Maliseet language and culture. Peter Paul received an honorary Doctor of Letters from the University of New Brunswick in 1970 and was named to the Order of Canada in 1987 in recognition of his important role in Maliseet language preservation. The video will be on permanent viewing in the Tappan Adney exhibit room at Connell House in Woodstock, NB, which documents his cultural and legal advocacy rights work for the Maliseet People of the region.

UTP: What resource(s) would you recommend to descendants of settlers who want to develop their understanding of the Indigenous experience in Canada?

UTP: What does “Indigenous History Month” mean to you?

Alma H. Brooks: Indigenous History Month doesn’t mean much to me, I am hardly aware that it exists. All my life, history has been a one-sided story, mostly lies. The history books need to be decolonized or at least give us a chance to tell our side of the story. It has yet to be told.

UTP: Do you plan to celebrate it?

AHB: Why would I want to celebrate “Indigenous History Month” when Canada is working diligently every day, in the midst of a world pandemic, to exterminate our Indigenous rights & extinguish our sovereign place in the world as Indigenous Peoples? No thank you.

UTP: What resource(s) would you recommend to descendants of settlers who want to develop their understanding of the Indigenous experience in Canada?

AHB: For other resources I would recommend the following texts:

You can watch the book launch for The Gatherings: Reimagining Indigenous-Settler Relations, in which the co-authors share their experiences of the meetings that brought Indigenous and non-Indigenous peoples together and open up on what they learned during the process.

This post was created by UTP. If you're a UTP author and wish to write for the blog, you can reach Craig Blue, our Digital Marketing Coordinator, at cblue@utorontopress.com.