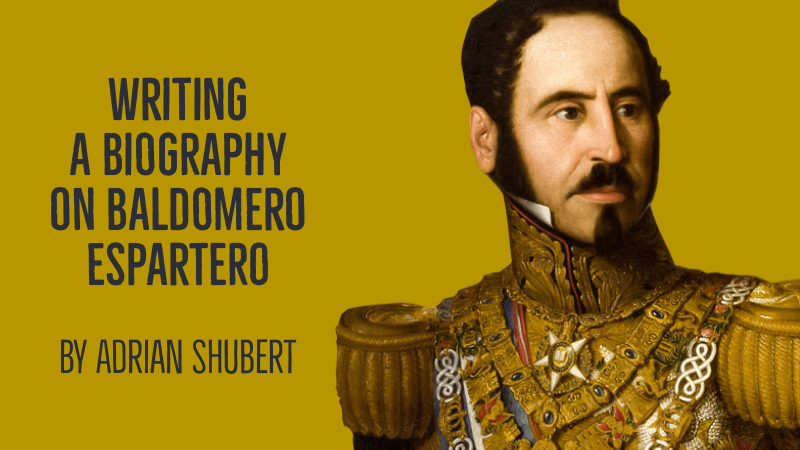 The Sword of Luchana tells the story of the charismatic nineteenth-century figure Baldomero Espartero. Adrian Shubert tells us why he decided to write a biography on this enigmatic figure who went on to become the most influential general in nineteenth-century Spanish politics.

I am not a habitual reader of biographies. I had certainly never written one before; never even been tempted. My previous books include a labour history of Spanish coal miners, a social history of modern Spain, and a history of bullfighting. So why did I decide to write a biography of Baldomero Espartero?

Biography is the most popular form of writing about the past, at least in the Anglophone world. If there is a “peculiarity of the English [speakers],” biography may well be it. Even so, the attitude of historians to biography has been ambivalent, if not openly hostile.

This fraught relationship began with Thucydides, the first historian in the European tradition, but it became more general in the nineteenth century, with the professionalization of history, and then in the twentieth century, with the emergence of approaches such as Marxism, the Annales, and social history that downplayed the role of the individual in favour of groups or large structures. In a wonderful phrase, the distinguished literary biographer Michael Holroyd called political biography “the shallow end of history.” This animus remains very much alive. In 2009, David Nasaw summarized the scholarly consensus in a roundtable on biography in the American Historical Review by saying historians thought biography “a lesser form of history” incapable of producing sophisticated interpretations of the past.” And, in its long list of prizes, the American Historical Association has no prize for biography.

Things began to change in the 1990s, however. The emergence of microhistory as practiced by Carlo Ginzburg and Natalie Zemon Davis showed how obscure individuals could become the subjects of compelling stories. Historians interested in subjects such as women and racial and ethnic minorities, as well as in the emerging field of global and transnational history, recognized that an individual life could be a powerful vehicle for study.

Biography itself also changed. Traditionally a straightforward narrative account of a socially elite, politically powerful, great man – and occasionally a great woman – there were new pools of potential subjects. There were also new ways of approaching individual lives that made the genre more convincing to historians. The most attractive to me is what French historian Sabina Loriga has called biographical history: biographies “guided by a series of well-formulated, but also flexible, general historical questions”.  This approach retains room for “great men” but does so in order to explore the idea of greatness itself, what Spanish historian and biographer Isabel Burdiel calls the “chorus of voices competing to impose their different narratives.”

The result was a growing number of what I call unexpected biographers. In the introduction to his definitive life of Adolf Hitler, Ian Kershaw declared that biography “never figured in my intellectual plans as something I would want to write.” And Adele Perry and Bryan Lewis spoke for entire generations of historians, myself among them, when they described their journey from gender history and social history to biography.

Espartero was the perfect subject for me. His was a life worthy of a character created by Stendhal or Gabriel García Márquez. Born into obscurity in a rural backwater of central Spain in the waning years of the eighteenth century, as a seventy-five-year-old man he was offered – and turned down – the throne of an industrializing nation. During his long life, he fought against Napoleon, Simón Bolívar, and other Latin American independence leaders; won a seven-year civil war; served as regent for the child queen Isabella II; and spent years in exile in England. He governed as prime minister and also received multiple noble titles, including that of prince, which was normally reserved for members of the royal family. By his sixties, Espartero had become an almost mythical figure.

At the same time, Espartero’s life could be used to explore central issues in Spain’s modern history. The first is: to what extent did Spaniards have a shared national identity and where did it come from? Espartero was at the centre of mobilization around the nation, one driven from below by the many thousands of ordinary people all over the country who admired, even revered, the man they saw as the unyielding champion of liberty and, especially, the bringer of peace after a long and brutal civil war. It was these people, and the entrepreneurs who catered to them by producing lithographs and affordable images and books, who through decades and across generations kept alive what I call the cult of Espartero, a cult to which only those to Napoleon and Garibaldi compare.

The second question is gender. What did the age of revolution in the Atlantic world mean for gender relations? Were the new societies structured around a strict public/private dichotomy in which women were consigned to the purdah of domesticity, or were their public spheres sufficiently capacious for women to stake out a domain, either as individuals or collectively? In Spain, the roles of women were the focus of debates in which women participated, and which were themselves a constitutive part of the liberal revolution. To explore this issue, I give a central role to María Jacinta Guadalupe Martínez de Sicilia y Santa Cruz, Espartero’s wife of 51 years who played an important part in his public life. If the sources had permitted, I would have written a double biography.

The final question is historical memory. This is a burning public issue almost everywhere in Europe these days. In Spain, it has centred almost exclusively on the Civil War and the Franco regime, but it reaches Espartero as well. The Spanish version of my book, published in 2018, ended: “the most famous and revered Spaniard of his time, the person many saw as the embodiment of peace and constitutional government, has been completely forgotten. He has never even been accorded the modest recognition of a postage stamp.” Within eighteen months, and citing my book, the Spanish post office announced that Espartero would launch its new “protagonists of Spanish history” series.

Adrian Shubert is a professor in the Department of History at York University.

An Opportunity We Cannot Afford to Miss: Applying Hard-Won Lessons from Prior Crises to Post-Pandemic Economies
Canada Votes, 2021