Home > Blog > Something within Me: An Excerpt 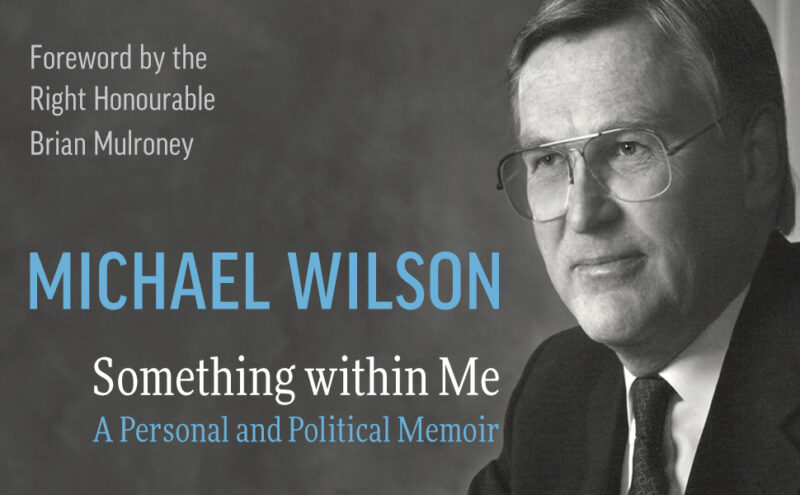 Something within Me: A Personal and Political Memoir highlights how the late Honourable Michael Wilson’s personal life blended with his political life, detailing his advocacy for mental health awareness as well his involvement in important pieces of legislation that made significant impacts in Canadian political and economic history.

This is the Foreword that the Right Honourable Brian Mulroney wrote for this highly anticipated book.

If a Prime Minister of Canada is lucky – and I mean really lucky – he will wind up with a Michael Wilson in his cabinet, ideally as minister of finance. As I sat across the cabinet table from Michael for nine years and watched him in action, I knew that as Prime Minister I had been handed a major gift.

A man of high principle, good humour, and unassailable integrity, he was kind and thoughtful in his approach; brilliant, fully prepared, and determined in advancing major questions of public policy; and loyal and supportive of me and colleagues in cabinet, caucus, and the House of Commons.

Years ago, in describing the challenges and the cut and trust of politics at the highest level in Canada, Prime Minister Pearson wrote, “Don’t be downhearted in the thick of battle. It is where all good men would wish to be.” Michael Wilson’s close friendship, valued counsel, and unswerving support made that come true for me.

Why do I mention these initiatives today? Well, for a very good reason –because each one was part of the foundation for a modernized Canadian economy, and each one was in large measure designed, negotiated, and implemented by Michael Wilson. Together, these policies – which were initially strongly resisted in Parliament and across the country – have over time quite simply transformed Canada. Canada has been well served by some good ministers of finance of all parties. But, there are very few Canadians whose vision for a brand new economy ever materialized, or whose leadership contributions to our country will resonate as powerfully and durably in history as the body of work left to us by Michael Wilson.

A few weeks prior to his death, I had my last telephone conversation with Michael. He was at home in bed in a weakened condition but had lost none of his courage, optimism, or good nature. He told me that the family was well, that he thought he was rebounding somewhat in his medical tests, that he hoped to get down to Florida that winter with Margie to golf and to rest, and that they both looked forward to having dinner with Mila and me in Palm Beach.

But the timber of his voice told me that this was probably our last conversation. I told him what a magnificent job he had done for Canada as minister and ambassador, how vital had been his contribution to the cause of mental health over the last quarter century, and how his devoted leadership as chancellor had so enriched his beloved University of Toronto.

I told him how much I admired him and loved him. And as I placed the phone in its cradle, I wept for my wonderful friend who had meant so much to Margie, to his beautiful family, to Canada, and to all who had the privilege of knowing him and working with him closely. I thought, too, of how much he will undoubtedly come to mean to all who will benefit over the decades from his vision, his sacrifice, and his service to our beloved country.

James Joyce once wrote that “the past is consumed in the present and the present is alive only because it gives birth to the future.” Well, Michael Wilson made certain with his exemplary life and sterling contribution that the future of his Canada – one that he had served so honourably and well – will bring opportunity and hope and happiness to all who hold our coveted citizenship as the decades unfold and Canada continues on its path to higher achievement, greatness, and success.

And 50 or 100 years from now, if Canadians stop for a moment to reflect on the leaders and builders who brought our country to such an impressive and commanding place in the family of nations, I suspect that many will whisper a special word of gratitude to Michael Wilson, whose brave and visionary nation-building contributions will then be even more evident than they are today.

And they will know then – as we do today – what an exceptional man Michael Wilson was, and how splendidly he served Canada and all of her people.

Brian Mulroney is a Canadian politician, leader of the Progressive Conservative Party of Canada (1983–93), and prime minister of Canada from 1984 to 1993.