Home > Blog > Homeless in the Time of COVID: What Happens When COVID-19 and a Shelter Crisis Collide 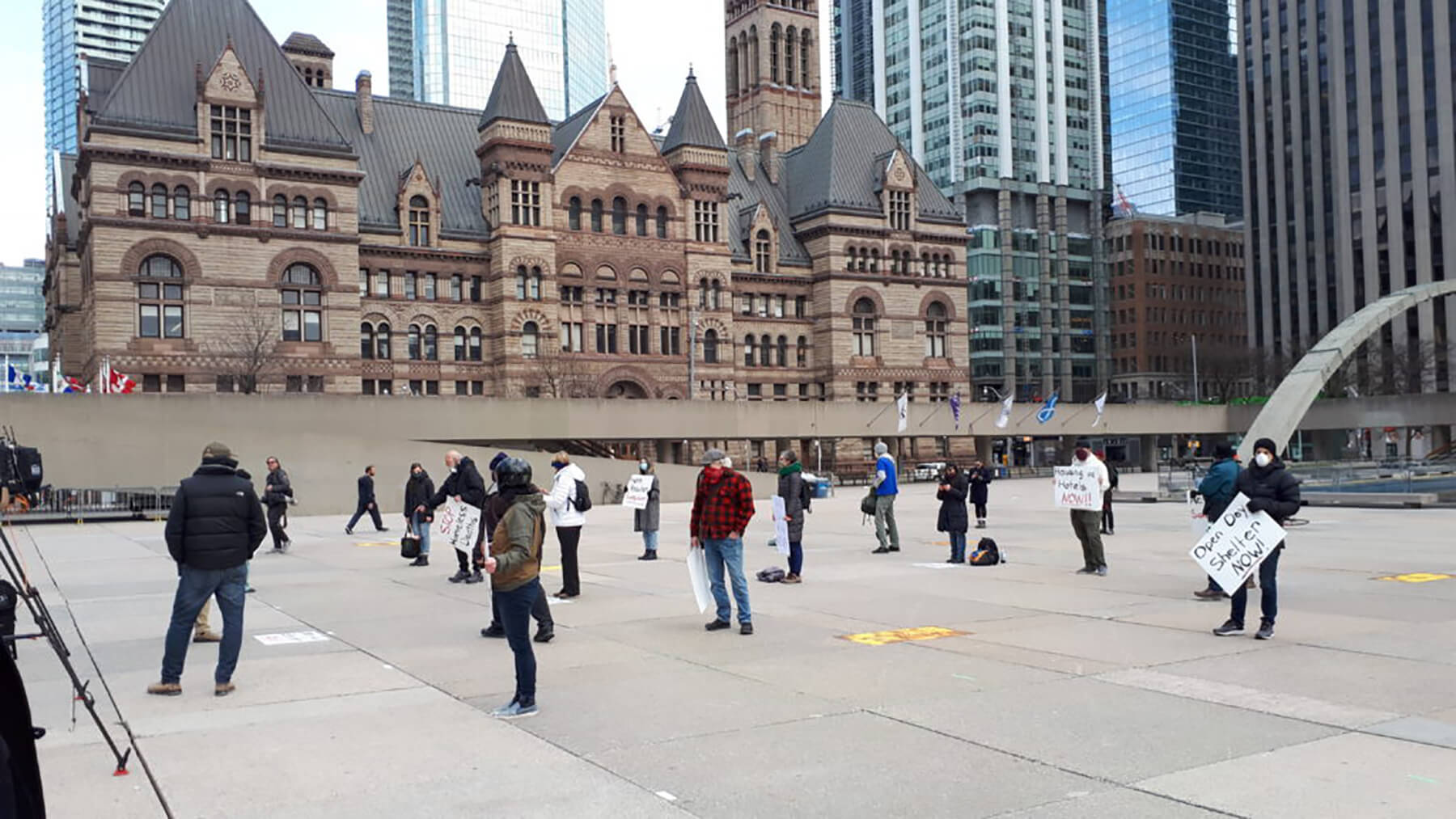 The COVID-19 crisis has had a massive impact on people around the word, but perhaps those most at threat are those who have poor access to food, shelter, and basic hygiene. A.J. Withers, co-author of A Violent History of Benevolence, looks at the crisis facing homeless people in Toronto and other parts of Canada, and examines what can be done to avert the crisis. 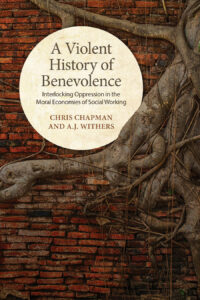 Across Canada and the United States, homeless people are among those whose lives have been the most viscerally impacted by the precautions put in place to slow the spread of COVID-19. The public health directives to “stay home” and “wash your hands frequently” are impossible for homeless people. Homeless people have found the places that they depend upon – when they are kicked out of the shelter early in the morning – are now closed. Community centres, libraries, most drop-ins, and coffee shops are closed or only open for take-out. Overdoses are up, with overdose prevention sites’ hours reduced or closed altogether. This has created a big problem in people’s lives as they have nowhere to go – nowhere to go for the day, nowhere to go for food, and nowhere to go to the bathroom. Panhandling is nearly impossible on the mostly empty streets and the little cash obtained is hard to spend. In many jurisdictions, hanging out in public parks has been criminalized. In major city after major city, this is the daily experience of many urban homeless people.

At the same time, homeless people are at an increased risk of contracting COVID-19 and having a more severe COVID-19 disease because of the higher rates of underlying conditions in the homeless population. Homeless people staying in shelters find themselves in similar congregate living situations to those in long-term care homes, many of which have been devastated by the disease.

In this post, I will focus on the situation in Toronto, the traditional territories of the Anishinabek Nation, the Haudenosaunee Confederacy, and the Huron-Wendat. While I am discussing how COVID-19 impacts homeless people in Toronto, similar social policy decisions have been made throughout Canada and the US, and are key contributing factors to homeless people’s experience of the current crisis.

In Toronto, like in many places, the shelter system was already in crisis: the conditions were terrible and there weren’t enough shelter beds. For years, I have been trying to organize more beds and better conditions in Toronto’s shelter system in a broad coalition made up of homeless people, frontline workers and advocates, as a member of the Ontario Coalition Against Poverty (OCAP). While the City claims otherwise, homeless people and frontline workers cannot access shelter beds and are told they are full. City Council passed a resolution in 1999 to keep the shelters at 90% occupancy to have flexibility in the system. It has never met this standard. Several years ago, the City opened several respite sites to act as over-flow spaces. These are 24-hour drop-ins with cots or mats on the floor with little space between them – their conditions are especially bad. COVID-19 superimposed a crisis onto a pre-existing crisis.

Toronto has started flattening its curve. However, cases of COVID-19 among homeless people are rising dramatically – from 69 to 213 cases between April 17 and April 27. As of May 13, there have been 299 cases in the shelter system. In one Toronto shelter, 75% of the 200 residents have tested positive for COVID-19. The overcrowding of shelters and respites and limited washroom availability in these facilities create the perfect opportunity for the disease to spread.

There is a long line of policy decisions, from the federal and provincial government’s withdrawal from building social housing, to provincial welfare cuts in the 1990s, neoliberal attacks on the social safety net, and the entrenchment of those attacks by subsequent governments, that led to growing homelessness. All three levels of government have adopted policies that promote the increased commodification of housing, rather than support social housing for poor people.

Toronto, like most jurisdictions in Canada and the US and both federal governments, has adopted Housing First (HF). This is a neoliberal policy that identifies those individuals considered to be most costly, “chronically homeless” people, and works to house them – with varying degrees of support. HF is a definite improvement over models that require people go through mental health or substance use treatment and demonstrate they are “housing ready” before being housed. HF is an ideology and set of policies that is rooted in the principles of individual choice, harm reduction, individualized support, and community integration.

However, HF is paternalistic and operates under the ethic of the healing power of domination and imagined moral superiority, an ethic that Chris Chapman and I discuss extensively in A Violent History of Benevolence. Here, experts know what is best for homeless people and their choices are constrained by HF policies and workers.

HF has been embraced by right-wing politicians like Harper and Bush and neoliberal “left-wing” politicians like Trudeau and Obama because it promises a solution to a social problem without increasing social spending. Indeed, Sam Tsemberis, the founder of HF, and Henwood explain that HF program funding “can be offset to some degree through reduction and eventually elimination of outreach, drop-in, shelter, and transitional housing programs” (p. 188).

HF advocates justify their calls not to take further measures to alleviate the shelter crisis because of their belief HF will eliminate the need for services. This is how, the Toronto Alliance to End Homelessness (TAEH), Toronto’s primary Housing First advocacy group, organizes against the opening of more emergency shelter beds – even in the midst of a housing crisis. “Our system is full beyond what experts consider safe and what City Council itself set as a baseline for acceptable capacity levels,” said Kira Heineck, the Executive Lead for the TAEH, as she implored City Council not to open more beds beyond what was already planned. Rather than allocate for more funds, the TAEH and other HF advocates call for existing funds to be allocated along HF policy lines.

This approach may make sense when there is sufficient low-income housing available. When shelters are full and there is a housing crisis, not adequately addressing the crisis in the shelters only promotes human suffering. Indeed, the number of people the City of Toronto’s Streets To Homes HF workers’ were housing had been trending downwards for years (462 in 2009 to 252 in 2017), according to documents I obtained through Freedom of Information requests. Frontline workers I have spoken with attribute this to the current housing crisis in Toronto coupled with low social assistance rates.

In 2018, a coalition of groups demanded an additional 1,500 beds be added to the shelter system. OCAP said the beds were needed in part because “recurrent outbreaks of infectious diseases in shelters have killed multiple people and made many sick.” In a partial victory, 1,000 beds were won. However, the City had not yet operationalized all of these beds prior to the pandemic (by which point at least 2,000 new beds were needed to meet rising demand). At the same time, there is massive need for low-income housing that the City does not plan to adequately address.

Homeless people and their allies have taken individual and collective acts of resistance against the conditions that put their lives in danger during this pandemic. In Toronto, many people left the shelter system and set-up encampments where they could socially distance. The City arranged for 125 6-month housing units for many of these people. Advocates have held a socially distanced protest and filed a lawsuit because conditions in Toronto’s shelters are so bad. The Mayor denounced the lawsuit saying the City’s response was “epic.” In Surrey and Vancouver, homeless people and their allies have attempted to turn public buildings into emergency shelter. In Los Angeles, homeless people have moved into empty homes to socially distance, saying: “No one should be homeless when homes are sitting empty.”

While pandemics may be unavoidable, the crisis that homeless people are experiencing around Canada and the US was. Indeed, homelessness itself is avoidable. But, to ensure the safety and security of the most vulnerable in society, we must abandon neoliberal policies and adopt policies that ensure proper incomes and decent, affordable, and accessible housing for all. This may seem impossible but so did getting entire countries to stay in their homes five months ago. We have the collective will to ensure our collective survival, now we need to decide what kind of survival we want moving forward.

Click here to find out more about A Violent History of Benevolence: Interlocking Oppression in the Moral Economies of Social Working.

A.J Withers is a PhD candidate in the School of Social Work at York University, and an organizer with the Ontario Coalition Against Poverty.

Isolation Reading for the Week of May 18
SHIFTing the Mindset During COVID-19: Part 6 “Shifting Collaboration to Build Synergy”