Home > Blog > Behind the Book: Exploring Illustrated Children’s Literature under Lenin and Stalin 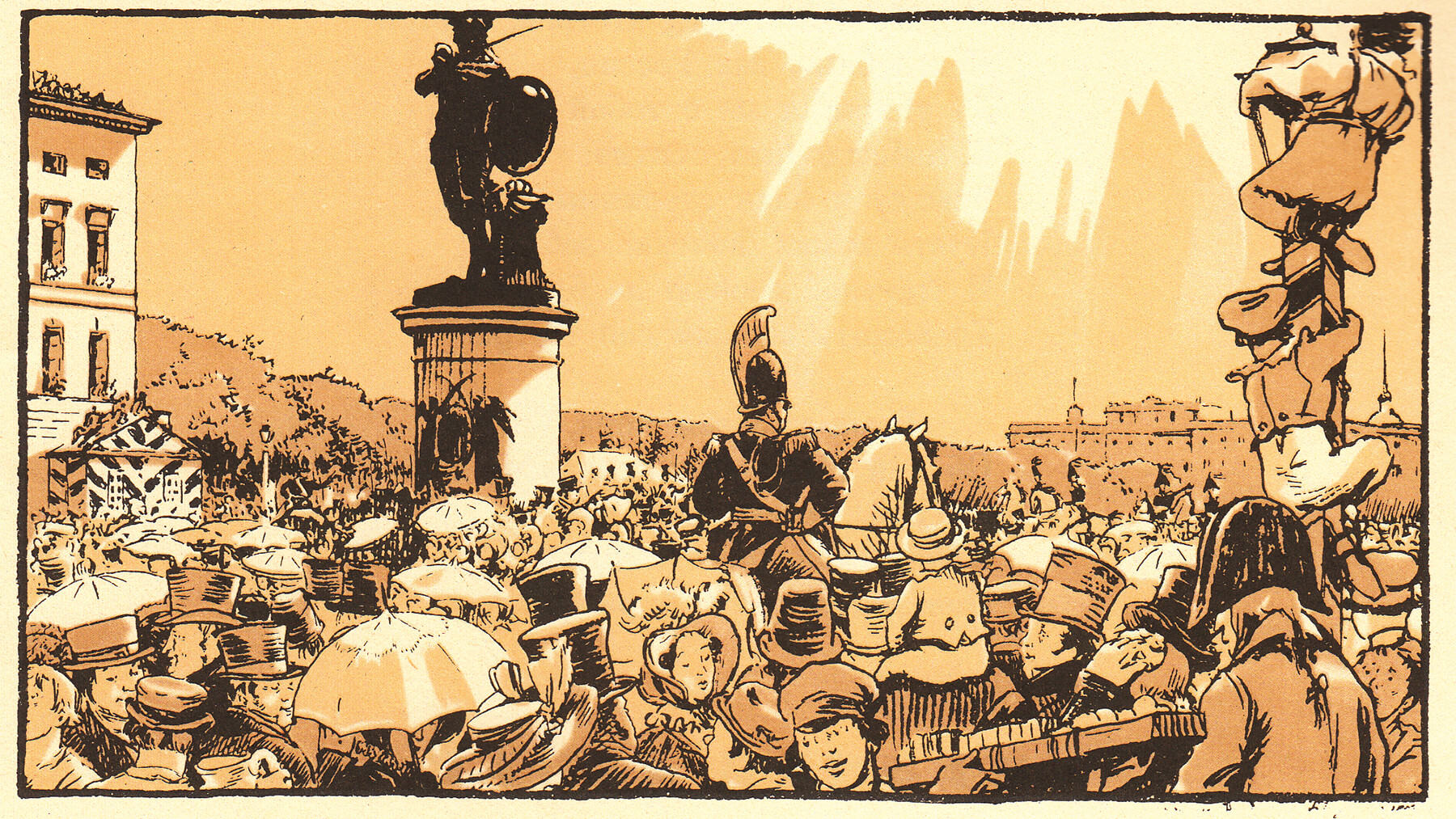 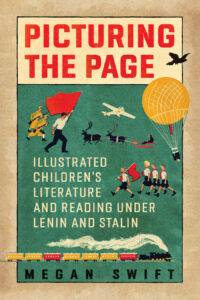 It’s probably no accident that I started to write this book the year that my oldest daughter was three and the year before my second daughter was born. I was a scholar of Russian literature, but not children’s literature. During the day, I would go to the University of Victoria and teach classes – one of my favourites was “Culture of the Russian Revolution,” which I accompanied with lots of vibrant visuals on PowerPoint slides. I love the aesthetic of the Soviet 1920s and 30s. I think many people picture it as drab and gray, but almost every artistic expression from this period is bursting with life and emotion. The signature colours are red (of course) and black. The signature size is larger than life. The shapes are bold and geometric. It’s extremely appealing and modern and never strikes me as dated, even though it’s over a century old.

This is Vladimir Mayakovsky’s Soviet version of “Little Red Riding Hood” from 1922, illustrated by fellow avant-gardist El Lissitzky. In this version the wolf is vindicated for devouring the hero because it turns out that he was not as “red” as he should have been (pictured below).

In the evening, I would read bedtime stories to my very young girls. These included a healthy dose of my old favourites from the 1970s, including the green-headed, blue-handed Ring-bo-ree swilling Jumblies of Edward Lear, the charming young badger Frances, the mischief-maker Curious George, and the delightfully and terrifyingly lawless Wild Things. One of the great pleasures of childhood is being read to, and while the parent is reading, the child is looking at the pictures on the page. I found that the illustrations from those books were indelibly marked into my imagination and that I was unreasonably outraged if updated illustrations had replaced the versions that I remembered. Like many parents, I wanted to share the source of my joy with my children and make the family bookshelf inter-generational.

That fall I traveled to St. Petersburg to do research at my old stomping grounds, the Russian National Library. The massive stone building at the corner of Nevsky Prospect and Sadovaia Street is featured in one of the PowerPoint slides that I showed to my students every year. The photo is from 1917 and a crowd of people are running down Nevsky Prospect away from armed guards – right past the library where I did much of my research, the same library that now, in the twenty-first century, was lined with commemorative photos of the librarians who had been arrested during the Stalinist purges. In Russia the past is heavy and always present.

During the so-called July Days of 1917 there was growing street violence, which was blamed on the Bolsheviks. Here troops (pictured right) under the Provisional Government are firing on Bolsheviks to disperse them. The Russian National Library is shown in the background.

In St. Petersburg, I was sitting in one of the library’s reading rooms looking at an illustrated copy of Alexander Pushkin’s poem The Bronze Horseman (1833), but something wasn’t right. The first fully illustrated version of the poem was done by Alexander Benois, a famous modernist who had emigrated to Paris after the revolution. But this version had been published under Stalin, at a time when modernist art – and Parisian emigrés – had been violently repudiated. Something else about this volume struck me as odd. On the inside was printed “Biblioteka shkol’nika” – this was part of the well-known Schoolchild’s Library series put out by the State Children’s Publishing House. They had republished what would have been controversial illustrations, and they had done it by carefully cutting and editing Benois’s illustrated series. This was a piece of adult literature that had been repurposed for an adolescent reader and it suddenly struck me that the means of its repurposing was through its illustrations. Why and for what purpose were unknown to me at that time (there is no short answer; it took me all of what became Chapter Three in my book to explain it) but there’s nothing like a puzzle to inspire a book project. It was right then and there that many things came together: my knowledge of Russian literature from the 1920s and 30s, my love of the Soviet aesthetic, my bedtime children’s reading, my interest in how Russia’s past informs her present, and my desire to find out what was going on in Soviet children’s literature and reading under Lenin and Stalin.

This is one of the most recognizable illustrations from Alexander Benois’s Bronze Horseman series (pictured left). He created it in 1916 and was completely unaware that it had been reproduced in Soviet editions of the poem, even in the 1939 and 1948 Soviet public-school textbooks called Russian Literature.

One of my colleagues at the University of Victoria once divided literary scholars into those who “do theory” and “archive rats.” I am (proudly) the latter. I found the rare illustrations that went into my book in research libraries on three different continents. Working in research libraries is like doing detective work while the clock ticks down on the number of hours you have left in St. Petersburg or London or Illinois. Illinois? Yes, one of the largest Slavic libraries in America is in Urbana-Champaign, a college town outside of Chicago. Its multi-million-dollar collection sits in the middle of corn fields. The library is divided into an east wing and a west wing. The west is air conditioned but the east is not – a not inconsiderable fact when you step through a door from west to east and are hit by sweltering mid-western summer. The floors of the library go up but also deep underground. To save money, the lighting only comes on by motion sensor. Very few things have been as eerie as looking for a book down long, dark, echoing rows deep underground. “East” also has half floors. Going up in the elevator you can choose floor 3 or 3.5, 4, 4.5, 5, or 5.5 (apparently, it’s not just in Being John Malkovich). Luckily, having trained at research libraries and archives in Russia, I am no stranger to strange things. In fact, I thrive on them. Here are some of the discoveries I made in my adventures in research:

Some of the best research discoveries are a matter of serendipity. I had read about the prescriptive “What I Should Read” lists released to help Soviet parents select appropriate titles for their children, but finally saw one for myself when my colleague happened to show the one above, which resided in a small donated collection at his college, at a conference. This delightful poster, put out by the State Publishing House in 1928 (pictured right), became the design for the cover of my book.

I found this illustrated version of Anna Karenina (pictured below left), by far the most sexualized I had ever seen, in the British Library. The illustrations were done by Nikolai Piskarev in 1933, during the Stalin era, but you’ll notice that it’s in English. This was a luxury edition done for the Foreign Languages Publishing House.

This is the title page of a poem (pictured below right) by Vladimir Mayakovsky called “Let Us Take the New Rifles.”  The poem was written in 1927 but was revived in illustrated versions for children during World War II and after. This one was created by a foremost wartime children’s illustrator, Alexei Pakhomov, in 1959. Studying illustrations like these helped me to conceptualize my argument that the childhood reading of the generation that went to the front was revived for their children in the 1940s and 50s in an express attempt to tie the sacrifices of the revolution to the victory in war. This kind of inter-generational reading is something that I explore in Part Three of my book.

The most common question I get asked about children’s literature under Lenin and Stalin is: wasn’t it just propaganda? Well, yes and no. Yes, because for most of the period from 1917–1953 (that is, from the October Revolution to the death of Stalin), the state controlled all publishing and the state had a special interest in educating children with socialist values. But no, because calling something propaganda sometimes assumes that it is flat, uni-dimensional, straight-faced, and tedious – and this children’s literature is colourful, funny, inventive, touching, and witty. And the illustrations are beautiful. Russia’s top artists worked in children’s book art, creating things that had never been seen before, or re-doing the illustrations to classics and fairy tales from the past but making them speak to the cultural ideals of the day. This is where illustrations did the fascinating work of creating new associations and meanings while the words themselves remained fixed. That story of the pictures on the page is the story I tell in my book.

Click here to find out more about Picturing the Page: Illustrated Children’s Literature and Reading under Lenin and Stalin.

Megan Swift is an associate professor of Russian Studies at the University of Victoria and author of Picturing the Page: Illustrated Children’s Literature and Reading under Lenin and Stalin.

Layers of Decline: Deindustrialization and Its Impacts in Post-Industrial Cape Breton
An Excerpt from Black Racialization and Resistance at an Elite University