Home > Blog > Being Fat Has a History 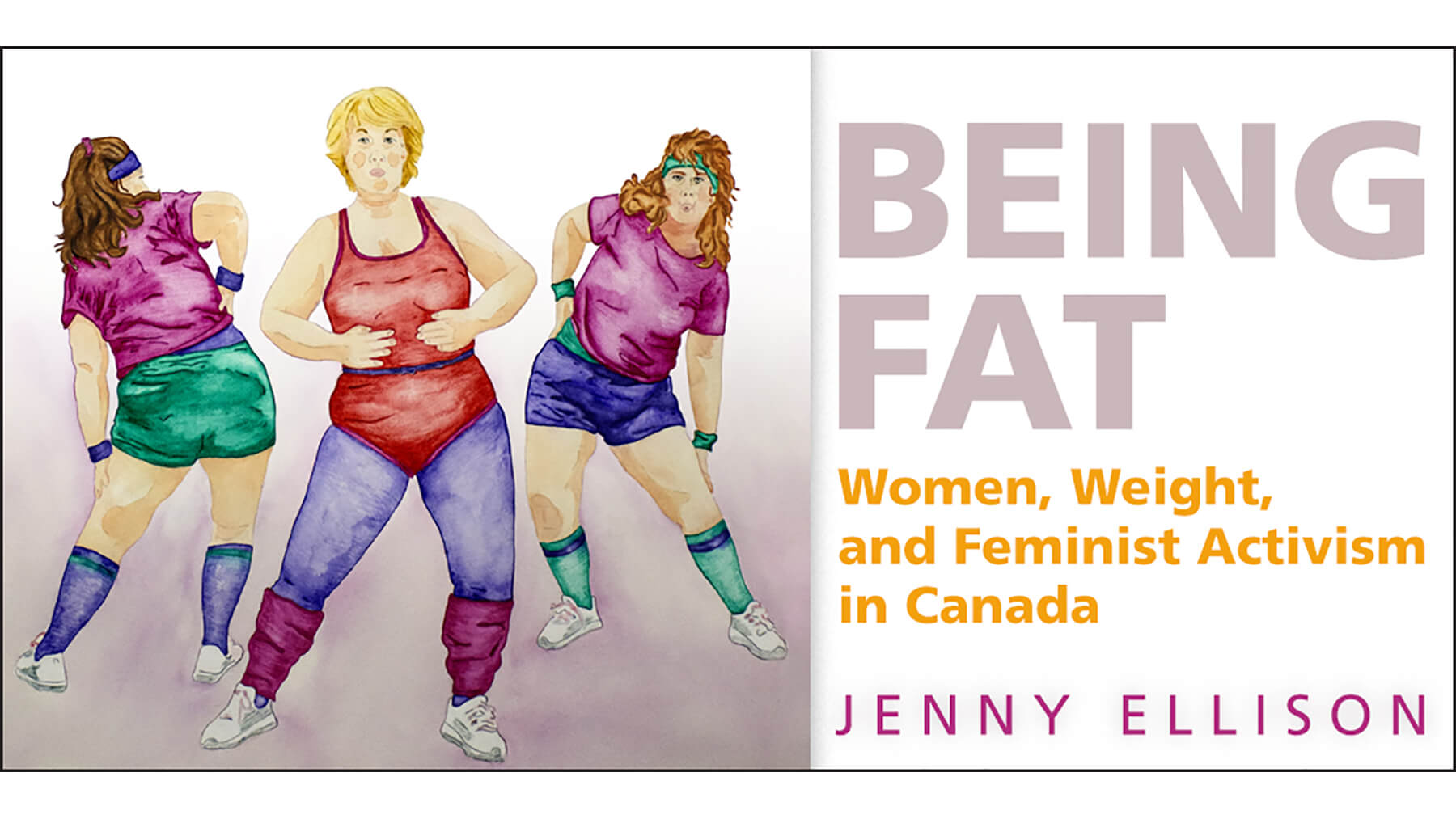 Released this spring, Being Fat: Women, Weight, and Feminist Activism in Canada focuses on the earliest strands fat activism, a social movement that has existed in Canada since the 1970s. In this post, author Jenny Ellison discusses some of the research that went into her book and explores how fat activists wrestled with feminist issues of the era, including femininity, sexuality, and health. 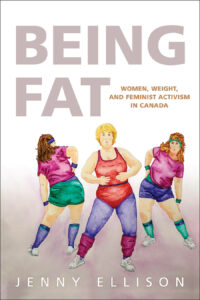 I met Janet W. in her Burnaby, B.C., home on a rainy October night. She agreed to meet after I cold called her a few weeks earlier, explaining that I was a historian working on a study of fat activism in Canada. I’d found her name in newsletters for the Vancouver branch of Large as Life (1981–85) preserved at the Canadian Women’s Movement Archives. Poring over the documents, I was thrilled to find women of the 1980s talking about beauty and bodily norms in their own words: making fun of public health campaigns like ParticipACTION, critiquing size-ist newspaper advertisements, debating the best place to buy jeans, and documenting their work to build fitness and fashion programs for fat women only. Large as Life’s activism was lively, diverse, and unexpected.

At our meeting, Janet described herself as being fat her “whole life.” She came to fat activism in her mid-30s, divorced, a working mother of two who was always “broke.” She decided she wanted to explore her feelings about being fat, and a therapist recommended a workshop called “The Forgotten Woman” at the Cold Mountain Institute, a therapy centre on Cortes Island, B.C. Janet couldn’t afford it but her therapist believed in it enough to pay her fees. She borrowed money from her parents to travel from Vancouver. Janet felt nervous about leaving her kids with a babysitter but remembered feeling a sense of urgency: “I had to go, I had to go. It was sort of like life and death, it was really important.” At the workshop, participants explored their feelings about being fat through conversations, visualization exercises, and on one memorable afternoon, dancing naked. On her return to Vancouver, Janet joined Large as Life, participating in clothing swaps, fashion shows, and exercise classes for fat women only.

Janet is one among fifty-two women interviewed for Being Fat: Women, Weight, and Feminist Activism in Canada. Experiences of fat oppression, feminism, and activism collided in diverse and unexpected ways in Canada. The book explores the earliest strands of fat activism, documented in archival sources like a 1975 Wages for Housework newsletter article on fat liberation. It ends in the mid-1990s with the emergence of Pretty Porky and Pissed Off (PPPO), a burlesque performance group that represents a generational shift in the movement. This twenty-year window loosely correlates with “second wave” feminism in Canada. Based on the idea that it is OK to be fat, the book shows that fat “activism” and the “movement” encompass a variety of activities. It features groups that have regular meetings and publish newsletters, organize events, and elect an executive. I also use these terms to describe activities like fashion design, self-help groups, plus-size modelling, and dance that are undertaken in the name of empowering fat women.

Necessarily, the process of researching the book challenged my understanding of feminism and fat activism. I expected to find activities that fell along the ideological and organizational lines I discussed in women’s studies and feminist history courses at university – radical, liberal, or lesbian feminists, women seeking legal reforms, those working under the umbrella of Status of Women Canada or reforming the CRTC. Some fat activism exists on the boundaries of, or as a response to, these feminisms. Montreal’s LG5 (lesbiennes grosses cinq, 1984–92), for example, formed because members felt frustrated with “looksism” in Montreal’s lesbian feminist community. In 1984 they staged a protest at an event intended to unite feminist groups in the city, challenging their sisters to let go of their desire to be – and to be with – slim women, just as they had let go of the trappings of heterosexual femininity, like make-up and long hair.

Often, however, fat activism results from organizers’ sense of un-belonging in other, social sites like exercise classes, clothing stores, doctor’s offices, and in popular culture. Beyond Large as Life, Being Fat explores the work of female entrepreneurs who created clothing stores, fashion brands, and exercise videos for fat women in order to fill a perceived gap in the market. Being Fat takes readers inside these stores and classes to discover the ways that entrepreneurs harnessed their personal experience to build their brands. Building on Kathy Peiss’s study of the early American beauty industry, Hope in a Jar, I show how Canadian entrepreneurs used their embodied experiences to establish themselves as experts and friends to their customers. Suzanne Bell, who was Large as Life’s first fitness coordinator, went further, going on to create three businesses for fat clients: an exercise studio, an exercise clothing line, and a popular Vancouver plus-size clothing store. She knew not everyone came to her because they believed in fat acceptance or liberation, but Bell saw in every client an opportunity to “preach” her gospel.

Some activists and entrepreneurs refused to label their work as feminist and distanced themselves from the movement. Janet W. remembered feeling feminists were “a little bit too far in a direction for me.” And yet much of what she did with Large as Life looked and sounded a lot like feminist iterations of fat activism. As I got deeper into the project, I began to see these refusals as part of the history of feminism rather than as a phenomenon separate from it. This approach was inspired by A. Finn Enke’s analysis of the “long reach” of feminism in their book Finding the Movement. They argue that by the early 1970s feminist ideas began to travel beyond the women’s movement into the everyday activities of women. Many people “enact feminism” in ways that are unnamed and go undocumented. Canadian fat activism reflects the patterns Enke identifies in their work: explicitly feminist work co-exists with entrepreneurial activities, community initiatives, and personal acts of defiance against bodily oppression. In spite of their differences, all groups draw on similar ideas and practices that grow out of feminist activism: creating women-centred spaces, challenging the medicalization of fat bodies, empowering participants through consciousness-raising, and encouraging people to reflect upon their femininity and gender roles.

Fat activist groups discussed in the book universalized the fat female experience to their detriment – they failed to understand the intersections of race/ethnicity, gender, and ability that are fundamental to social change. Activists of the 1970s and 1980s believed that being fat and female is the starting point for people to come together and make change: “fat women” need better clothes or feel pressure to diet or must reject feminine norms. Only in the 1990s did anyone ask: “which fat women?” Scholars of gender and sexuality will see in Being Fat an example of the ways that experience shapes feminist discourses and limits our view of the past. It takes women’s own accounts of their embodied experiences seriously, while also critically analyzing and contextualizing their stories in the longer history of gender in Canada.

Contemporary activists grappling with issues of race, gender identity, sexuality, and ability may draw lessons from the book on the movement’s past mistakes. I argue that being fat means different things to different people. To grow and build greater inclusion, the movement must meet people where they are, or work across ideological lines. Time, place, and situation mean that embodied experiences of fatness vary, and there is no one right way to be fat.

Reflecting on her experiences with Large as Life twenty years later, Janet W. described the impact of fat activism as “freedom to live in extravagant ways that I had never thought about before and to explore my more artistic side. And just be, just be.” Janet’s story reflects many late-twentieth-century feminist concerns: that women were struggling to live up to unrealistic standards of beauty, that they were preoccupied with their body weight, and that these experiences stifled their ability to be (or feel) liberated. At the same time, Janet’s story resists a straightforward reading of embodied experiences. For Janet, saying it was okay to be fat meant not only letting go of the dream of being thin, but accepting that weight loss was not the solution to her problems.

Meeting Janet had a big impact on my understanding of fat activism, because she did not live her life along a clear ideological line. She was a pioneering fat activist who was wary of calling herself a feminist. She didn’t care much for fashion and yet proudly displayed for me a sparkling, hot pink aerobics leotard she purchased from Suzanne Bell in the 1980s. Janet’s story is emblematic of the complicated ways that women respond and engage with social and cultural norms. They apply feminist ideas to the parts of their lives that matter most, and in ways that are relevant to their lives.

Click here to find out more about Being Fat: Women, Weight, and Feminist Activism in Canada

Jenny Ellison is the Curator of Sport and Leisure at the Canadian Museum of History, and co-editor of Obesity in Canada: Critical Perspectives, also published by University of Toronto Press.