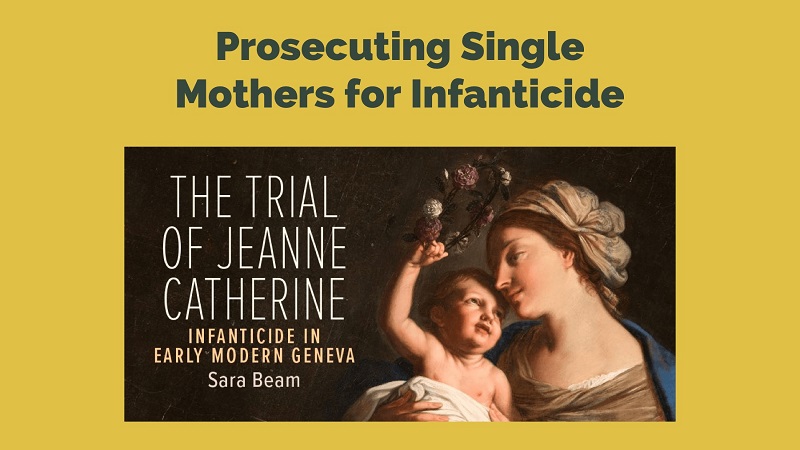 The Trial of Jeanne Catherine: Infanticide in Early Modern Geneva is a page-turning translation of a seventeenth-century infanticide trial that tells the story of a single mother accused of poisoning two children, one of whom was her own. In this post, author Sara Beams tells us more about this suspenseful historical mystery and why it’s perfect for students seeking to learn more about motherhood, child rearing, gender, religion, local politics, and the practice of criminal justice in early modern Europe.

In 1686, a single mother named Jeanne Catherine Thomasset is charged with poisoning two young children: her own illegitimate daughter and the son of a rural wet nurse. So begins a harrowing early modern infanticide trial during which the authorities interrogate Jeanne Catherine repeatedly to try to discover the truth. The Trial of Jeanne Catherine is a suspenseful and historical mystery that offers students the opportunity to learn about motherhood, child reading, gender, religion, and the practice of criminal justice in early modern Europe. This translation and critical edition of the entire trial allows students to dive directly into a seventeenth-century courtroom and decide for themselves what really happened.

When I first came across the trial of Jeanne Catherine, the use of torture caught my attention. At the time, I was working on a book manuscript about judicial torture and was searching for instances of its practice in seventeenth-century Geneva. The fact that Jeanne Catherine was tortured was striking both because of her high social status and because she was tortured repeatedly – more so than most defendants. Jeanne Catherine was a noblewoman and a member of an honourable Swiss family that controlled lands northeast of Geneva, so it was surprising that the Genevan authorities dared to accuse her of any crime at all. Usually, defendants in infanticide trials were female servants or workers in the textile industry seduced by their masters or by fellow workers. That even a respectable noblewoman could be accused of infanticide reveals just how vulnerable unmarried women were in a society in which almost all property was controlled by men.

Most women accused of infanticide in early modern Geneva confessed their guilt fairly readily and, if they did not, were tortured once or twice. In contrast, Jeanne Catherine was subjected to three sessions of torture and the estrapade, the most painful Genevan torture technique. The authorities seemed determined to get Jeanne Catherine to confess. But she refused to play along and repeatedly insisted that she was innocent. I quickly realized that this battle of the wills between Jeanne Catherine and the Genevan judges was a compelling whodunnit and a powerful teaching tool.

While the overarching structure of the trial is straightforward, this critical edition is unusual in the variety of perspectives that it offers to students. In addition to the witness testimony and interrogations, the edition includes the day-by-day deliberations of the criminal court and several letters written by the Thomasset family demanding the immediate release of Jeanne Catherine. The introduction offers students key historical information that helps them to unpack the documents. A list of important characters, a glossary of key terms, an expanded bibliography, and a comprehensive index enable students to navigate the rich materials on offer. Students can explore different themes, including the use of medical experts in the courtroom, women’s work caring for pregnant mothers and infants, and the difficulties of single motherhood.

For historians of criminal justice, this trial showcases the important role that medical evidence and expert witnesses played in the prosecution of infanticide. The evidence against Jeanne Catherine hinged on autopsies conducted by Genevan medical professionals. They meticulously examined the corpses of the two dead children and discovered that they both had been infected with worms and exhibited symptoms of poisoning. The physicians hired by the court also conducted controlled experiments on a granular substance they found in the stomach of the boy who died, which they claimed was pure arsenic. Even though this conclusion is at odds with modern medical science, the fact that the judges relied so heavily on medical evidence to prove the case against Jeanne Catherine shows that they were trying to be objective and to discover the truth.

For historians of women, the trial reveals a fascinating underworld of working women who tended to Jeanne Catherine when she was pregnant and later took care of her illegitimate daughter Jeanne.  Sending children to rural wet nurses soon after their birth was a common practice in the early modern period so the fact that Jeanne Catherine left her daughter in the care of a peasant woman for over two years was not unusual. Rural women living near cities expected to be hired as midwives and wet nurses for city women, some of whom sought to hide their pregnancies and their bastard children from prying eyes. The wet nurse and her mother were key witnesses for the prosecution and so we hear their point of view far more so than in most criminal trials. Their testimony reveals the existence of a network of female care workers who were indispensable to childbirth and child-rearing in the early modern period.

Finally, the trial allows a rare glimpse into the emotional life of a single mother. Jeanne Catherine claims to have been a loving mother determined to do her best for her daughter. She visited little Jeanne repeatedly at the home of the wet nurse and the edition contains letters she wrote to her family begging for money to support her daughter. If she deliberately poisoned the children, why did she not immediately flee Geneva for sanctuary? Jeanne Catherine’s intentions are difficult to disentangle and students are sympathetic to the difficult choices she faced. Unraveling the mystery of her fate is a compelling project to share with your students.

Interested in finding out more about The Trial of Jeanne Catherine: Infanticide in Early Modern Geneva. Click here to read an excerpt from the book.

To request exam or desk copies of The Trial of Jeanne Catherine: Infanticide in Early Modern Geneva or any other UTP title, please email requests@utorontopress.com and be sure to include the course name and number, start date, and estimated enrollment.

Sara Beam is a professor of History at the University of Victoria and author of The Trial of Jeanne Catherine: Infanticide in Early Modern Geneva